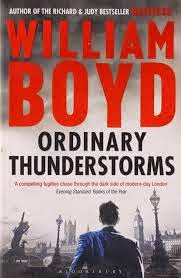 There are lots of William Boyd’s trademark themes in Ordinary Thunderstorms and the sentences are as dense as ever.

Adam Kindred’s life is turned upside-down on the day he takes an interview for a prestigious post at Imperial College in his field of climatology. He bumps into a doctor who works in the field of medical research and when the doctor leaves behind a set of scientific documents relating Kindred does the right thing and does his best to return them.

The next time Kindred sees the doctor, it’s in his apartment and he happens to be wearing a knife in the middle of his chest. Kindred removes the knife with fatal consequences and leaves the building, knowing that the file he’s carrying holds some great significance.

There’s a Thirty-Nine Steps feel to this section and it’s expertly handled.

The feel soon turns to something akin to Robinson Crusoe when Kindred is forced into hiding and chooses a small triangle of land on the banks of the Thames at Chelsea. From this triangle, he sets out on a new mission to survive the elements as well as to avoid the police who are looking for him and the murderers who want him dealt with.

At this point the book changes pace and becomes a slowly unfolding adventure.

We visit a grim building estate, a fancy boardroom, the boat that is home to policewoman Rita Nashe and the brilliantly constructed Church Of John Christ. Each strand of the story is superbly written to form a substantial whole.

Boyd seems to have so many ideas to explore that the book is jam-packed with interesting and original tangents. What this meant for me was that I felt the pace became a lot slower than I wanted, particularly when things were heading to their close.

I cared enough and was curious enough about the characters to have a strong desire to find out their fates. On the final straight, however, I’d have been happier with more of a sprint finish than a help-me-get-to-the-finish-line struggle. I’d almost lost my appetite by the climax, which is a shame.

A big fan of Mr Boyd’s books, I did enjoy this. Unlike the other books of his I’ve read, this one wasn’t quite a triumph.
Posted by Nigel Bird at 14:16