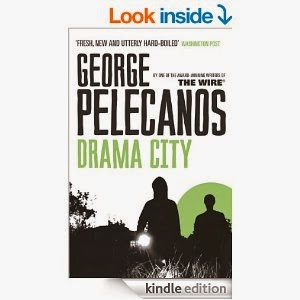 “The more you walk this road, the longer the road seems to be.”

I’m not entirely sure how George Pelecanos does it. Drama City is yet another example of the man’s brilliance. He tells a huge number of stories all at once by weaving together the lives of the main players with those of the supporting cast and still manages to drive forward a central theme that never lets on about where it’s going until things reach their climax.

Lorenzo Brown is a dog man. It’s where he’s ended up after a spell in prison for working drugs with his friend Nigel. Lorenzo has locked the demons of his past away and he’s determined to stay clean and live a straightforward life. As a dog man, he trawls through the city’s difficult spots and encounters a cast of unsavoury situations. In contrast to the animals he works with, his own dog is well-cared for. In this brief description of his pet, Pelecanos manages to hint at the violence of the environment and let us know about the dog all in a oner:

“Jasmine’s coat was cream coloured, with tan and brown shotgunned across the fur.”
Lorenzo has a probation officer, Rachel Lopez, and she (like me) is rooting for him all the way.
Lopez invests a good deal into each of the offenders she works with, believing in the possible. Unfortunately, she’s fighting demons of her own. Like Lorenzo, her job leads her into many difficult and dangerous places and her ways of coping are easily understandable.

For me, the power of Drama City lies in the strength of the characters. From an early stage I felt a strong desire to see them come through their own personal battles unscathed. Once that desire had been established, Pelacanos began to play with the inhabitants of the book like a mischievous god, throwing them to the lions piece by piece and forcing me to watch as the situations played out.

Pelecanos also manages to summarise the profound using very simple brushstrokes and is able to impart huge amounts of information through the tiniest of things (take, for example, the provenance of a matchbook).

Drama City is a hugely satisfying read. The only way I could recommend it more highly would be to stand on something very tall. Be warned, it’s not for those of a nervous disposition.
Posted by Nigel Bird at 16:17