One Man's Opinion: THE MONSTER'S WIFE by KATE HORSLEY 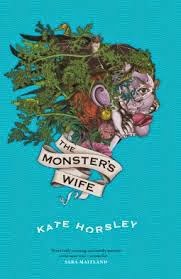 Kate Horsley is clearly a brave lady. She’s taken on a master work and written a sequel. In doing so, she’s produced a novel of class and beauty that’s worthy of its recent nomination as Scottish Book Of The Year in the Saltire Literary Awards.

Imagine, if you will, a small Scottish island at around the turn of the Nineteenth Century. It has a tiny population who are bound to the land and the sea for everything. Along comes the strange visitor from Europe and everything starts to change.

“Who’d have thought in our modern day, to see the plagues of Egypt washed up onto our shores?”

Nature seems restless. Strange things have been washed up on the beach. Dolphins lay dead and smiling on the rocks. Livestock around the island is found ripped apart. Napoleon’s ships are moored nearby. It seems that God is angry and the people of Hoy gather in the church to pray and to swap tales.

It’s not long before folk turn their attention to the mysterious Victor Frankenstein, who is living and working up at the big house, and to May and Oona who are working there for him.

Oona is our guide and she’s a fabulously complex character. She has a rare strength and determination about her and yet has a physical frailty that softens and yet heightens these traits. She shows a tremendous loyalty to her best friend, May, who is about to leave her to marry a twin from the village. It’s this loyalty to May that initially draws Oona in to the life of Frankenstein. It’s a mysterious world that she enters and the complex layers are peeled slowly and tantalisingly away as we get to discover this new world through Oona’s eyes.

The world of the big house is a stark contrast to the superstitious, God-fearing community who talk of the bible, the selkies and the Finman. It’s a practical, scientific place full of caged birds, home-made contraptions and experiments aimed at discovering something of the nature of death and exploring the possibilities of resurrection.
It’s a stroke of genius to tell the story from Oona’s perspective. It works to the book’s advantage at every turn.

What is so stunning about the book for me is the use of language. The work flows from one gem of a sentence to another. The dialogue captures something of a sense of period, is clean and never stilted in the way that some attempts at historical fiction can be. The shadows and sense of darkness are embedded into the work with great subtlety and the images are often so perfectly honed that they really can take the breath away.

The characters, and I’ll include the island of Hoy here, are wonderful. Their differences are exploited superbly when things start to go wrong and the status quo cracks like dry bones.
On top of all that, the novel is incredibly gripping. The tension builds and the sense of the sinister grows in the way of any great page-turner.

I found The Monster’s Wife to be a terrific read. It’s a stunning work and I hope you’ll take the time to check it out.

If you happen to be in a book group, I’d suggest you make this your next recommendation. You’ll get so many hours of discussion and so many pats on the back from the other members for the idea that you really won’t regret it.

A classic in the making.
Posted by Nigel Bird at 11:11