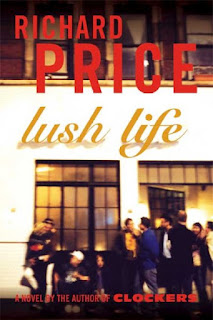 Richard Price is a heavyweight of a writer that’s for sure.


For the first seven rounds of Lush Life, he’s out like Cassius Clay, speed and footwork, nifty combinations and power, mouth and trousers.  From then on, it’s more of a case of the later Ali, all rope-a-dope with the occasional flurry of brilliance (and sometimes merely a flurry).


Lush Life is set in Manhattan.  The beginning centres upon a group of characters whose lives are soon to intertwine, each of them vividly described and full of life - full of life, that is, until one of them is shot.  The fallout from the murder is huge and the police are quick to arrest the victims boss, barman Eric, on the grounds that he’s been identified by two eye-witnesses.


Eric is put under immense pressure as the cops try to find the information they need.  As the investigation proceeds, the locality is laid bare and explored quite beautifully.


The day-to-day of police work and cop-politics are also exposed.  Loyalties are stretched.  Favours called in.  Relationships explored.  The need for people to ‘become something’ is analysed.


Most importantly, the interest level is maintained at a high-pitch.  The descriptions are superb and the dialogue purrs.


A new dimension is introduced when the victim’s father arrives in town.  He falls apart as the pages turn and it’s a painful thing to witness as it seems so very true to life.


Up until the point where conflicting stories to those of the eye-witnesses come into play and the resolution to that particular issue is reached I was completely involved and delighted that there was so much more of the book to enjoy.


Not long after this point, I found myself having to make a real effort to move forwards.  There was a lot of revisiting of themes, scenes seemed to be repeated, situations seemed to drag on without any sense of moving towards resolution and it actually felt like the author had lost the plot.


I became rather bored.  It wasn’t that the writing was of a lesser quality taken sentence by sentence, it just seemed that there was a dilution of purpose.  I had a feeling that Mr Price wanted to include all the ideas and knowledge he’d picked up during research and was determined to find angles that would allow him to do so.


I did battle with my fatigue and made it to the end, mainly because of the investment I’d made by then and because I really cared what happened to each of the main characters.


The book is far too long for my liking and I really feel the same story could have been told in half the space and would have produced a wonderful result if it had.


Richard Price has written great books, but for me this isn’t among them.  It almost made it, but lost on a split decision.  5 stars for Part 1, 2 Stars for Part 2 - overall, somewhere in-between.
Posted by Nigel Bird at 22:58