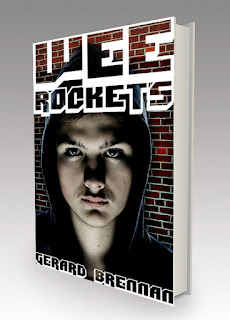 Gerard Brennan is one hell of a talented writer.  His new novel, Wee Rockets (US), is proof of this.  It’s a step up again from his hugely enjoyable novella The Point (US) and I suspect is another stone along a path destined for big things.


The subject of the book is a gang of kids on a Belfast estate.  They’ve been lead by Joe and his sidekick Danny to mugging local pensioners in order to raise money for fags and booze.


When a local Bruce Lee fan (Stephen McVeigh) decides to take on the gang, Joe and Danny decide it’s time to move on (it becomes especially complicated when McVeigh starts sleeping with Joe’s mother in order to gain further information).


Problem is the new leader of the Wee Rockets is unbalanced and greedy, so it’s not long before the Rockets have spread their wings and taken on some bigger targets.


Enter Joe’s estranged father.  He’s returned to his home after time on the run.  He’s still on the run, only this time he’s escaping England.  It’s through his eyes that we get to see some of the changes in the city and get to feel a sense of sympathy for those who have no way of adapting to the pace of change as quickly as it’s happening.  It’s also through him that we get to see that things were ever thus – the neighbourhood is tough and those who live there need to display the hides of rhinos to get by.


Tracking the plot wouldn’t be of help.  The Rockets get themselves into increasingly brazen robberies and assaults and the lives of everyone involved overlap with entertaining and sometimes disturbing results.


There’s no doubt that this is a crime book given the mischief that goes on and Brennan never shirks the darkness or the brutality.  It’s hard-hitting when the time is right and he chooses those moments very well indeed.


It’s also the case that the development of the crime plots themselves isn’t the key to the quality of the work.  What is really striking is the way the characters are so well-crafted and always engaging.  It didn’t take me long at all for me to feel I knew them all and had done for a while.  I can best honour that (and it’s intended as an honour) by mentioning the Coronation Street residents who are so well penned that years can go by and they can be revisited and pinned-down again within seconds of tuning back in.


The other aspect of the characters that I particularly liked is the way they are likeable in the main in spite of the things they get up to.  They are presented warts and all, yet in such a way that there are parallels with situation comedy – Brennan uses humour with great variety in a way that suggests he might try turning his hand to film and TV very successfully at some point (if he hasn’t already); there are one-liners, pratfalls and situational plays all the way through.


I’ve become a big fan over a fairly short space of time and would recommend this highly in the hope that it helps to gets the book the audience it deserves.


A real joyride of a read you should be seeking out before long.


Another winner from the Blasted Heath camp.