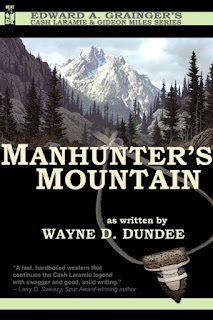 Before starting the review, here are a couple of bits of news.
Dirty Old Town (and other stories) (US) has now made it’s 1999th sale, which is amazing.  If you see ticker-tape falling from the sky, you’ll know where it’s coming from (Dunbar).

A mention also that there are 2 free books available today that you should have.  The first is WeeRockets (US), an absolute joyride of a book.  The second, very appropriately for this piece is Bullets For A Ballot - US - (another in the Cash Laramie/Gideon Miles series). Go get.


Now for Manhunter’s Mountain (US).


Silver Gulch is a mining town that’s all but run out of metal to mine. Those who stay are either born optimists or are too lazy to move from the mountains.


In rides US Marshal Cash Laramie.  He’s there to collect an armed robber, Lobo Ames.


Between Cash and his man is a bartender with a sawn-off shotgun and a walrus moustache, not that Cash is going to be scared off by a little bit of facial hair.  In the process of arresting Ames, Cash ends up spilling blood and burning down the only bar in town as well as all the booze in it.  That doesn’t please the miners, who don’t cheer up much when he takes the only two women (prostitutes) with him as he sets off to bring Ames to justice.


A posse of miners go after the girls.


The situation gets further complicated when bounty hunter Cole Bouchet turns up hoping to take Ames in for the reward.


The impending winter storms look like they’ll have something to say in the outcome and you’ll have to read it to find out whether they do or not.


It’s a fairly uncomplicated Western.  The men have hard names and are used to living with nature.  The horses are noble.  The prostitutes have hearts of silver. The description is evocative and the action comes thick and fast.


Cash Laramie isn’t as full of contradictions as he seems in the collection of stories The Adventures Of Cash Laramie And Gideon Miles (US), but that may be as much to do with the nature of the job involved in this novel.  He remains a character I’ve come to love reading about and this did more than enough to have me itching to read more (and so I did – review later in the week).


A solid, unflinching Western.
Posted by Nigel Bird at 10:41