One Man's Opinion: MILES TO LITTLE RIDGE by HEATH LOWRANCE 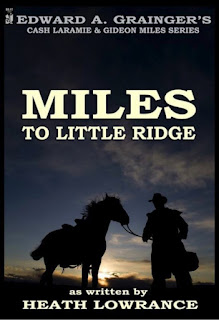 Even though he’s cool as a cucumber, Gideon Miles is the kind of US Marshal who creates waves wherever he goes.  It’s not just the badge he carries that sets people against him, it’s the colour of his skin.


In Miles To Little Ridge (US), the folk he meets when he rides in to town don’t take kindly to him for other reasons, namely that he’s there to pick up a clean-living pillar of the community who’s also the only living parent of a young girl.  The Miles is to take the man in for trial, the charge being armed robbery.


Serendipity has it that the guy he should be paying attention to, an axe-wielding Swede, is the first to set eyes upon him.  The Swede and Miles have history and the Swede is determined to get his revenge.  Problem for Miles is that the sheriff in Little Ridge is racist enough to want to tilt the odds in The Swede’s favour.


It’s a great tale.  The opening description sets the scene perfectly. The flavour of Western is so strong I could practically smell the body odours, the heat and the horse-sweat.  Great, too, the way the blacks and the whites are merged to greys as the plot unfolds.


I’ve also picked up a new line in swearing – ‘You stumblebum fiddlefoot’; I’ll be trying that one if I ever get into a tight spot.


A very enjoyable and stylish read.
Posted by Nigel Bird at 10:15