One Man's Opinion: BOOZE AND BURN by CHARLIE WILLIAMS 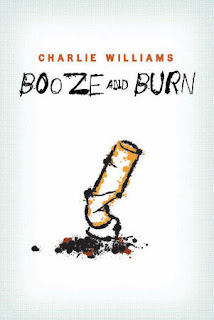 Before the main event, a mention for my current read.  WEE ROCKETS by the excellent GERARD BRENNAN is a real joyride of a book.  It's published by BLASTED HEATH and it's free today, so I'd get over there and get a copy if I were you.  You won't regret it, I promise.

Now on to CHARLIE WILLIAMS.


I loved DEADFOLK, the story of Royston Blake’s adventures in the town of Mangle.  I loved it so much that I didn’t’ feel able to move on to BOOZE AND BURN for fear it might just not do Blake justice.  Now I’ve been there, I realise I needn’t have worried.  All I’ve been doing is wasting time.
The other issue that can spoil a follow-up book is the over-doing of the references to the previous work.  Charlie Williams kicked that one in to touch early on as Blake addresses the reader and says of Deadfolk:

‘You what?  Forget it pal.  I ain’t telling you that story no more.  I’ve told it enough times already – especially to the cops and I’m sick of it.  You want to know about the guns and chainsaws, go ask someone else.  Everyone knows around here.'

In Royston Blake, I reckon we have the world’s finest unreliable, first-person narrator.  He’s a warts-and-all story-teller who’s neither afraid to embellish or to cut himself to the quick (then again, Royston’s not afraid of anything).

He’s back on the door at Mangles’ premier drinking establishment (Hoppers), throwing his increasing weight around as only he can.  It doesn’t take long for the new equilibrium of Mangle to be disturbed when a new face arrives in town.  Not only is the guy an outsider, he’s soon to become the owner of Hoppers  and the supplier of a new kind of sweet/drug to the young of the town.

One of the gang of young is Mona.  She’s had a personality change since being introduced to the new drug and she’s fallen for the supplier.  Mona’s father, Doug, employs Blake’s services to sort out the guy, which is the point at which the story explodes.

I’m so impressed by Charlie Williams.  He’s created an even more special book in Booze And Burn than he managed in Deadfolk.

Blake’s character is even sharper as are those of the others in the cast.  Blake’s a real rogue – the cleanest term I can think of to make sure this doesn’t offend the Amazon boards – but he’s immensely loveable with it, for reasons I don’t entirely understand.  Many was the time I wanted to put my arm around the guy (metaphorically, of course, as my arms would need to be twice as long to do the job) and have a whisper in his ear – “You don’t want to be doing that, Blake.” Or “Why don’t you try saying it this way instead?”  Not that he’d listen.

The plot here is developed and a perfect pace.  It becomes fairly complex, but is always easy to stay with.  There are plenty of cliff-hangers to keep a reader interested. The turns of phrase are superb and Williams is a master of the simile – “[I]wanted nothing more than the comfort of clean sheets and a firm mattress, though...the mattress were about fifty year old and as firm as an old man’s tadger.”

Blake’s is also a master when it comes to shoving his boots into his own mouth.  Here, he’s trying to make his recently attacked girlfriend feel better about some damage to her face – “ ‘Reckon you won’t be doin’ much more strippin’, I says, giving her a friendly smile. ‘Less you wears a paper bag.” ‘

All in all, Booze And Burn shines a light onto things we might rather not see, then throws in a magnifying glass to make the focus more unpleasantly clear.  Britain at its worst can have a defensive, island mentality, compounded by small-town attitudes, brutally sharp tongues and minds narrower than barges.

For me, the book takes the Ghost Town of The Specials, the darkness of the Thatcher years, the cultural highs of Clint Eastwood and Minder and uses the energy to create the most wonderful set of characters imaginable.  Blake would have no problem wrestling any Spitting Image character to the ground, knocking the hardest from Viz to the ground, out-seducing Lady Chatterley's lover or drinking Homer Simpson under a table.  It’s funny, powerful, clever, brutal and a total joy from opening to close.