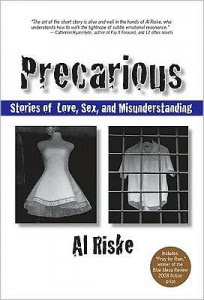 Less haste more speed. That one always confuses the hell out of me. I am working at pace though. Overstretched might be one way of putting it.
I'm not too stretched to miss out on a quick mention for a rather nice blog out there, The Crime Of It All. Check it out at:

www.thecrimeofitall.com
They say writing's a precarious business. Here's someone who can tell us all about it. Over to you Al.
Why did you write Precarious?

The stories in Precarious were written over a period of 30-some years and I thought of them as all very different, but as it turns out, they’re all about the same thing. Women and men. An endlessly fascinating topic. I suppose I wrote them to figure out how I felt about certain things. The great thing about stories is they can make you feel what someone else felt. The better the story, the more subtle and nuanced the feelings. Anyway, that’s what I look for as a reader. The surprise as a writer is how you can make yourself feel things you never felt before or never knew you felt.

You've been writing fiction for 30 years and this is your first book. Why did it take you so long to break through?

It took a long time because the stories weren't ready. I thought they were ready at many points along the way, but I can see now, looking back on earlier drafts, that they weren’t—and I wasn't. If Precarious had been published earlier, I wouldn’t have been nearly as proud of it as I am now.

How did you come up with the 15 stories in Precarious?

The stories came to me one by one, sometimes inspired by a photograph or a place I was visiting or a conversation I happened to overhear. Often the first sentence will come to me out of nowhere and a story will grow out of that. It’s all about tapping into the unconscious, I think. The stories represent my obsession with love, sex, and interpersonal dynamics — the inevitable conflicts and compromises, the quest for understanding. Not that I set out with any sort of master plan.

You studied journalism and worked as a reporter and editor. Has that background influenced your fiction?

Journalism is a great way to learn the craft of writing, and it gives you a chance to really hone your skills. Journalism is about listening and observing and reporting back. It’s about saying things clearly with the minimum number of words. No cliches. No redundancies. Strong verbs. All that applies to fiction as well, I think.

At times, your characters come tantalizingly close to finding love, but in the end it usually eludes them. What attracts you to that theme?

It’s probably because I was often unlucky in love. So much can go wrong, you know? Most of the time we don’t even know what it is we really want. Or we know but we can’t say. We can’t say because saying it out loud would spoil it somehow. We want the other person to figure it out, to just know what we need from them, but too few of us know how to read minds.

Which part of the writing process do you enjoy most?

I love the little moments of inspiration, the times when you wake up with a bit of dialogue in your head, or you’re taking a bath and you suddenly know how to resolve some element of the plot. Or else you’re simply typing along and you see a connection you hadn’t seen before. That’s really fun. Maybe you’ve included some detail but you weren't really sure why, but later it proves to be really useful and much more important than you could have imagined.

Which part is most challenging?

The hardest part is all those times when you’re not sure where the story should go next. You can sit and struggle with it in front of your computer, and eventually something may come to you, but it’s usually better to just take a break and let your unconscious mind work on it for a while. That’s been my experience anyway. Take a walk, take a bath, take a nap. Better yet, get a good night’s sleep. Come to think of it, that doesn't sound very challenging, does it? But it requires patience.

Has your approach to writing changed since you wrote the first of these stories?

Yes and no. I didn’t know what I was doing 30-odd years ago when I wrote the earliest of these stories. I still don’t. Not really. As I write, I’m just trying to figure out how I feel about things — and a lot of what comes out surprises me. It’s like, Where did that come from? From a more technical standpoint, I do seem to have fallen into a pattern where I tend to put down the dialogue first and then add layers of action and description. Which is weird because my very first stories had zero dialogue. Now it’s my favorite thing to do. I think I was so worried about not being able to do dialogue that I scared myself into getting pretty good at it.

How much of your writing comes from your own life, your own experiences?

People who know me well will recognize details from my life, but that can be misleading. There are little bits of me in all of my characters. Not just the narrators, but all the characters. And there are little bits borrowed from people I know and people I’ve met. Little details like that bring a story to life and make it feel very real, but we’re not talking about biography or autobiography here. My life isn’t that interesting. That said, one or two of the stories are fairly close to things that happened to me. Incidentally, some of the wildest elements in my stories—parts that sound too far-fetched to some readers—actually come from things I’ve overheard in public places.

What are you working on now?

I’m working on a short novel with a long title — The Boy Who Broke Sabrina’s Window. It begins with a 17-year-old boy breaking the window of a woman nearly twice his age — an accident that marks the beginning of an instant, inexplicable bond between them. It’s set in one of my favorite places — Taos, New Mexico — and explores some of the same themes as my short stories. Joshua and Sabrina share confidences, intercede in each other’s love lives, go on a date that scandalizes the town, and confront questions of fidelity, desire, and the nature of love. There are a bunch of other colorful characters as well, but events unfold through the eyes of Sabrina and the boy.

http://alriske.blogspot.com/
Posted by Nigel Bird at 16:19