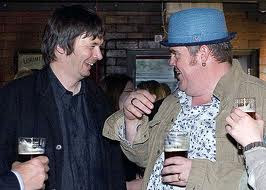 Indirectly, Ian Rankin was one of the reasons I wanted to put together the 'Dancing With Myself' series, not that I'm trying to pass on the blame or anything.

It stemmed from something that happened a good ten years ago now.

I was a regular at the Hay Festival for a good number of years, graduating from sleeping in cars to tents to a traditional, warm and cosy cottage.

Anyway, I had a ticket for an event for Ian and Lawrence Block. Imagine how excited I was.

I wasn't going to see the host, a man whose job was to get the best out of his guests.

I can't remember who that man was, but the whole crowd must have felt like serving him up for Rebus on a platter by the end. Couldn't get enough of his own voice. Didn't seem to get the idea that we hadn't gone to see him. Didn't get much out of Lawrence or Ian other than a hint of agitation.

In short, it was rubbish. What a waste of talent. The man, and I'd name him if I did remember, should have refunded us all our entry price and some more (as well as paying back his fee and compensating Ian and Lawrence for wasted time), then let the guests give us an hour of what we'd gone for.

So that's when I first had the desire to let people talk with themselves.

On a happier note, I went to a free event at the Portobello Book Festival a short while ago. It was free and packed with stars - Allan Guthrie, Alice Thomson, Doug Johnston and Caroline Dunford.

And Ian was the perfect host, asking brilliant questions, keeping things flowing, keeping the pitch of the atmosphere bang on and getting the best from everyone. Outstanding.

Why should I not have been surprised.

So here he is, then. A flower of Scotland, Ian Rankin:

Well, in 1990 my wife and I moved to rural France. First winter we got snowed in. I'd read every book in the house except two by Jilly Cooper: Rivals and Riders. I loved Rivals. It's about a TV station takeover. The baddies are really bad, the goodies are great, characters are smart and sexy and up for it. I re-read the book a year or two later and still loved it as pure escapism. Happened to mention this in an interview and Jilly sent me a small gift (a bar of soap!). So I mentioned her again and got champagne. This time, I'm aiming for the stars....

2. How often do you see your famous neighbours?

I saw Alexander McCall Smith this very afternoon. He'd been away and was just back. J K Rowling I see maybe twice a year, usually bumping into her at cafes and restaurants. It's not like the three of us sit together plotting how to invade the charts. Like most writers, we spend most of our lives in splendid isolation.

3. Was your own success luck or grind?

There's usually an element of luck to any success story - right place, right time. But my first few books were only moderately successful. It was book twelve before I could get a mortgage on a flat in Edinburgh. So there was a lot of slow grind, and plenty of times when I nearly gave up. Black and Blue was the turning point.

4. Did you always know Rebus had a limited life-span?

I knew from early on that he was living in real time, so was ageing. But I didn't know until relatively recently (two books from the end of the series) that he would retire at 60, as was mandatory for detectives in Scotland. I say 'was' because the situation is changing. I doubt we've seen the last of him. I did a Rebus short story this year and enjoyed being back inside his head. When I started out I certainly had no inkling he would stick around as long as he did.

5. Would you give it all up tomorrow for a shot at success in a rock band?

I'm 50 this year; way too late for rock n roll. At 19 I was in a band called the Dancing Pigs. If we'd made it big (or even medium) I wouldn't have been unhappy. But bands often have short shelf-lives. I'd be a bum by now, no doubt.

6. Who is currently the greatest living crime writer?

That's a tough one. It's also a matter of personal taste: are we talking classic whodunnits or noir? James Ellroy? Ruth Rendell? Maybe someone unknown in the English-speaking world. Does Le Carre qualify as a crime writer? I seem to remember the Crime Writers' Association gave him the Diamond Dagger many years back...

7. Drink can change some people's personalities - does it change yours?

Booze used to make me restless, a bit ugly. But then again, sometimes it made me sleepy and passive. If there are traits to your character which are usually kept bridled, it has a way of loosing them, not always for the best. But in a pub with your mates on a cold night, the conversation lively... what could be better?

8. Will a crime writer ever win the Booker Prize.

Oh yes, I think so. Whether the winning book will remain classified as crime fiction afterwards is more problematic. But great young writers are coming along who are poking and prodding the crime novel, stimulating it, getting it riled and restive, using it to tackle big themes, explore important questions about humanity and society and politics. The best of these will have a really good shot at winning the Booker.

9. I've asked you eight questions - is there anything YOU'D like to ask me?

Yeah, can you hurry up with the typing? There's a football game on TV in 20 minutes, cold beers in the fridge and curry to be ordered.

10. Last question then: give me the name of an album in your collection that you're ashamed to own.

There's a Phil Collins in there somewhere, and not one of his best...