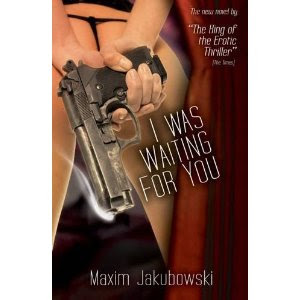 There's a really great series of interviews out there by a talented guy called Richard Godwin (he'll be appearing here very soon). He's had some of my favourites up at the 'Chin Wag' and yesterday went with the highly talented AJ Hayes (who appeared here early on in this series). I recommend you check it out then add it to your favourites.


Bob and Carol Bridgestock will also be appearing here soon. They have a new website at http://www.rcbridgestock.com/ in case you'd like to find out what they're up to.

And so to today's main event.

Earlier this year I got an email from Maxim Jakubowski. He was informing me that I'd be in the next collection of 'Best British Crime Stories'. I could have fainted and jumped to the moon within secondsof each other. Brilliant. Why so happy? Because to get in there is like entering a great institution.

He's something of an institution himself having been everywhere, done everything and burned the Tee shirts.

Today he releases a novel. After reading this you'll be wishing him the Best Of British too.


Q: So, you have a new novel coming out on November 1st. It’s been nearly 6 years since the last one. How come?

A: Well, CONFESSIONS OF A ROMANTIC PORNOGRAPHER took a lot out of me, being the end - or so I hoped at the time - of a whole series of novels with similar themes, moods and obsessions. I had mentally decided I’d take a year off or so before I tackled the next novel. Then the all-important business of life, procrastination, cowardice and all that seemed to take over, and a year became four before I finally decided to get on the novel-writing track again. And the groove returned ever so slowly.

A: Writing fiction is something I find terribly painful. Almost physically so. I have no problem with editing, devising books, even short stories but novels are awful. They take over your life, you sleep with them, or rather you don’t sleep as the story and characters keep on haunting your nights. It hurts. A lot.

Q; Is I WAS WAITING FOR YOU another semi-autobiographical novel, then?

A: None of my books are autobiographical. I swear. It’s just what people assume as so many of the male characters appear to resemble me. But actually, it’s the female characters I mostly empathise with in a strange way. Madame Bovary, c’est moi!

Q: And Cornelia is again featured in the book?

Q: So for for all those years, you did fuck all?

A: Totally. Only published 20 or so books, including a collection of short stories, a collaborative novel, scores of anthologies, ran the Murder One bookshop until I just grew tired of the lack of challenge, did hundreds of pages of journalism, ran a film and literary festival, saw a thousand movies, read a few thousand books. Edited other people’s books. Listened to music. And lived. I know, I’m just a lazy sod.

Q: I heard that your wife can always tell whether you’re writing fiction or non fiction?

A: Yes, on two scores: on one hand, I sweat differently and she can always tell what I have been writing when I put T-shirts, sweats or shirts in the washing basket; also, my rhythm at the keyboard is different! I think a lot is influenced by the music I write to!

Q: What sort of music?

A: Mostly rock, but sometimes orchestral or electronic stuff. Strangely, I always pen fiction with music blaring out loud, whileas I require a modicum of silence for journalism. Or maybe it’s all superstition.

Q: Music means a lot to you?

A: Absolutely. I couldn’t live without it. I’d sacrifice all of my books away to the Gods of whatever just for the talent to write music and create a wonderful melody. Sadly, I can’t even play a single instrument. Although, I’m very good at air guitar or air bass, you know.

Q: I saw on Facebook you already have another novel scheduled for 2011?

A: Yes. EKATERINA AND THE NIGHT. So many better writers than I have a strict rule whereby by the time their new book is published, they try to have the next one completed. I’m not sure this will be the case, as EKATERINA is still unfinished, but at least it should be well advanced by the time November comes. I was having lunch with one of my publishers and I thought I’d force myself to squeeze out another novel somewhat faster this time around and I agreed to a deadline, which would allow it to be published in the autumn of 2011. I have a great pride in my professionalism and never miss a deadline, however tight.

Q: But, unlike I WAS WAITING FOR YOU, it’s not a crime book, I hear?

A: A decade or so ago, I wrote a short erotic novel, THE STATE OF MONTANA, which became quite successful, with several translations into other languages and I sold the film rights to a very well-known A-list Hollywood actress, who thought it might prove a great challenge. I happily signed on the dotted line and eagerly cashed the six figure cheque. A few years later I had a phone call from her ‘people’ advising me she would not be filming it. She had now had her first biological child and decided she would no longer be doing any nudity in her movies. Needless to say, THE STATE OF MONTANA without nudity is inconceivable. It would only last five or ten minutes. But it’s a book I’m very fond of. Its mood, its characters, its form. So I’ve been wanting not so much to write a sequel to it, but an accompanying short book retaining some of its format and atmosphere and that is what EKATERINA will likely be about if I pull it off. Watch this space.

A: It just happened. I’m a writer who has never had anything to say. I don’t and won’t write about social things, the world, the human condition. I can even say I have a limited imagination. But people fascinate me, what makes them tick, why they do the things they do, and all that. As a result sex and its games, deceits and world appear to be the things most worth writing about. In my own way, Woody Allen’s views on sex and death are also mine. They are the only things worth writing about. Sadly, though, I’m not funny.

Q: Have you tried writing other things?

A: I’ve tried. It was awful. It had no soul. I worked for 20 years as an editor in publishing and I admire people who can write, plot and do those things well and with such naturalness. I know I’m not in that club. I have my little kingdom, and I’m sort of happy there for now. It’s never going to make my fortune, but I’d rather be knowledgeable about my limitations than delusional. I’m comfortable being the ‘King...’ even though I’m fearful that should I ever write a children’s book, the publisher might still wish to use that blurb!

Q: Any questions I should have asked?

A: Too many. And a good thing you didn’t; if you had I would have had to lie through my teeth or turn this interview into a piece of fiction.

Thanks Maxim. An honour.