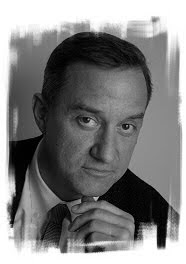 Dancing With Myself: Brian M. Wiprud

1. Your early Garth Carson series centered on wild supernatural conspiracy theories, from mind control to telepathic goat horns to shape-shifting serial killers. Was there a central theme to these books beyond just coming up with the weirdest, twistiest plots conceivable?

That series was more or less a send-up of conspiracy theories and mass gullibility. It never ceases to amaze me how some of the most rational people I know will dismiss conspiracy theories and yet harbor one of their own that is “true.” Americans in particular are so ardent about their conspiracies even in the face of conflicting evidence that it becomes a belief system, often dependent on the supernatural and a defacto religion. They have to believe that Oswald didn’t shoot Kennedy or else there is no order in the universe – despite the fact that nobody disputes that Oswald pointed a gun at the president, pulled the trigger, the gun went off and an instant later the president took a bullet to the head. Garth is routinely faced with dire circumstance at the hands of people completely immersed in conspiracies and the supernatural, and has to sort out what is real and isn’t. This process is often commensurate with figuring out his relationship with his brother. What I particularly like about these novels is the way the truth is revealed as a tree with many branches.

2. Do you feel your books or protagonists possess a common trait?

I think there’s a strong existential streak to my protagonists. They are conscious that the decisions they make don’t happen in a vacuum and that the concepts of good and evil may or may not be human inventions. Stories are best when they examine the human condition beyond the narrative, and that’s what I pretty much set out to do in a crime/thriller/humor format.

3. The wacky, snide, referential and fantastic qualities of the early books were sometimes referred to by critics as “post ironic.” How would you classify your more recent work?

FEELERS, BUY BACK and RINGER are so steeped in urban subcultures and morays that I think they might be characterized as crime urblore. But for marketing purposes let’s stick with “thriller.”

4. An oft asked question of authors is where do you get your ideas, but perhaps what’s more important is how do you develop your ideas once you latch onto a premise. How do you build it out from, say, a simple story of some missing paintings to include a love-sick assassin?

I think of it as story layering.

For example, the story of my next book RINGER is that a La Paz (Mexico) priest asks our lothario protagonist Morty to recover a lost reliquary from a New York billionaire. Morty seizes on this mission as a defining religious quest. But a single-strand narrative isn’t like real life where many stories are happening at once and where they intersect creates interesting situations requiring people to make important choices.

Intersecting stories and cross purposes, narrative wheels turning in opposite directions, generates humorous situations and fallout that propels the characters forward. So I added a second story about the billionaire’ tabloid queen daughter. She’s a huge liability, and the billionaire is awaiting a Mexican hit man he’s hired to come kill her. Enter Morty, a man on a mission from God who is mistaken for the hit man.

That’s just one way of fleshing out story premise, of course. I’m currently working on a straight thriller, and so cross purposes are not a story element that plays well with the earnestness of the plot and suspense. In this case I have a jewel thief pursued by the Serbian mob from which he mistakenly stole gems. The mob, in turn, is being monitored by the FBI, who have set a sting operation to trap the Serbians and recover the gems. But our thief steals the gems so now the FBI is looking for him as well – only the protagonist doesn’t know this. Instead of cross purposes I’ve equipped the story with common purposes, the narrative wheels turning in the same direction. Our protagonist is being doubly pursued, which raises the stakes and suspense.


5. Since the last of that series – TAILED – you seem to have changed course. FEELERS and BUY BACK are both books about Brooklyn and with no supernatural elements. Can you explain the transition from the one to the other, as a natural progression in your writing?

I’d like to say that it was my idea to start writing standalone novels, but the market necessitated a change - i.e. the Carson series wasn’t selling briskly enough to be a going concern. That said, the practical considerations forced me to grow as an author, to expand beyond Garth and Angie. I view that series as a fun, complete trilogy about America’s obsession with conspiracies that said all the things about family, friendship and relationships that those characters had the capacity to relate. “Jumping the shark” with the series was inevitable at some point down the line, so I think it’s probably better that I spent my time and energies exploring other kinds of novels.

6. It’s obvious that you are keenly aware of the changing fiction marketplace. How do you write to stay competitive in the publishing world?

I have to produce a book a year to stay in the game and try to hold onto my fan base. When I wrote FEELERS on spec, I realized that I might lapse two years without a published novel unless I wrote quickly. I did the math; I needed twenty pages a week.

So I increased my most productive time – instead of working three hours straight I began writing twice a day for one and a half hours, once early in the morning and once in the evening. I also write on a laptop that is not online – I don’t do any research or check email while I write, that’s done on the side. Also, I re-write on paper while traveling and commuting, and then make those changes on a weekend or some time other than my twenty-page production sessions. Once I hit twenty pages for the week, I put my “pen” down no matter how far I feel I might be able to push the story that week. The reason is that I need a reward system in place, motivation to get those twenty and then have the rest of the week off. Sounds lazy, I suppose, but down time is necessary to let the characters percolate in my mind until the following week. With this method I can crank out a first draft in four months and still have a life.

7. Speeding up your writing seems to be a business decision- does that have a downside for the creative part of writing? Does it impact the quality or feel of what you write?

Actually, I think the process I’ve described makes my writing more intense. During the four months of writing I am totally immersed in the story, and to be honest it’s invigorating. This is a much better way to write for me, much more gratifying and I feel fully vested in my characters all week long, even when I’m not actively writing. I feel them wriggling around in my mind, and I take notes on what they’re thinking. All this translates directly to make a better novel.

8. As part of your strategizing for the marketplace, do you decide what to write about based on what kind of stories you believe will sell?

If I want to remain published I have to take the marketability of my subject matter into consideration – that’s what separates a writer from an author. It’s a balancing act, to be sure, but there’s a way to do it without “selling out” – which I define as tackling a topic you don’t care about only to cash in on a popular trend in fiction. The book I’m working on now is my first straight thriller, which is calculated only in so far as humor hasn’t generated the kinds of sales to keep me published. This is a story I’ve been considering writing for some time that I hope will help keep me competitive in the market but also challenge me to grow artistically. Novels are art but the only reason they get published is because they are also a product, that’s the deal.

9. Are there any books you would like to write but feel you can’t because of the current book market?

I would have liked to write a sequel to BUY BACK with my character Tommy Davin. But the sales don’t back it up. To be honest, the FEELERS numbers didn’t necessarily justify writing next year’s RINGER, but that was contractual, and I’m hedging my bets that a sequel will boost revenue down the line based on the current level of film and TV interest in that series.

10. If you could send a message back in time ten or fifteen years, what would you tell yourself ten years ago?

One thing I might have mentioned is that it's important not to invest your life TOO much into writing. Ultimately the vainglory of being published pales by comparison to the importance of family and friends. I seriously don't think that on my death bed I'll be fretting that I didn't write more. More so that I could have loved more.

Slow and steady gets the job done, which translates into a happier writing experience.

and
“Pssst, Brian: Add orange bitters to your martinis :o)”