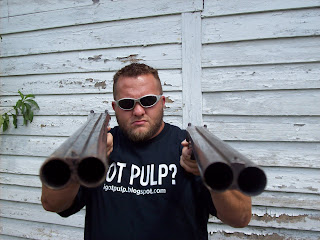 Quick plug for a series over at:


So, Halloween. Don't you think this is about as appropriate as you can get? Matthew McBride. Just look at his picture.

Except we all know he's a little cuddly. Has a feminine side. Welcome to

the McBride of Frankenstein...

1. Q) You're relatively new to the crime writing scene. What can you tell someone reading this who's never heard of you? Hoe long have you been writing?

A) You misspelled a word up there asshole ^. People are going to think you're illiterate.

Sorry about that. But trust me, they already know you can't spell. Now please, answer the question. I'm kind of in a hurry. I like to rush through things you know.

A) Oh, I know. (pause) Okay, well to answer my ques, er, your question, I started writing seriously about eight months ago. The first thing I ever wrote was for the Airport Flash Fiction Challenge last December. So about eight months, give or take. Although I did write a novel back in 2003, and a few partial stories on napkins and loose odd ball sheets of paper here and there. I never submitted anything until a super famous writing buddy of mine suggested it. Other than that, I had a short published in Deer & Deer Hunting once (Don't laugh, I actually made money from that story).

A) The answer to that question is both long and short. First of all, it seems very easy for me to do. Plus I enjoy writing them. It's also a good way to test the waters as far as a potential audience goes. The readers feedback is important, so are peoples comments. If they like the story they usually say so. If they don't like the story, they usually won't say anything.

The fact that my shorts have made favorable impressions on people here and there can give a guy a great feeling. Like maybe you're doing something right. Or at least barking up the right literary tree. If people like your short stories, perhaps they'll become part of the future audience that will one day support your novel(s).

3. Q) What are you working on now? Short stories or a novel?

A) I seem to always have a few things going at once. I've come to realize I must be a bit of a word juggler. My wife recently found a stack of these huge napkins that I started writing something on about eight or nine years ago (at work). Turns out it was close to a 9,000 word western that I can barely remember writing. A revenge tale about cowboys smoking opium and slaughtering each other. I really like it and I'll peck away on that for a while, then jump over to another book I'm writing about organized crime in the Ozark hills (my backyard). It takes place in the 30's and into the 50's. The golden age of gangster's, at least for me. The Depression, Tommy guns, bootlegging. And in between all of that, the occasional short.

4Q) Name two things readers would be surprised to learn about you?

A) My favorite color is orange and I hate Pepsi.

5. Q) You seem to have acquired somewhat of a reputation as a gun nut. Is this true?

A) Like I always say, you never know when a good machine gun is gonna come in handy. As I look around our old farmhouse, there's literally a gun(s) in almost every room. Protecting yourself is important. If somebody breaks into our house, somebody's gonna get pumped full of lead. Guns are important. I, myself, am armed quite often. Just because you never know when your gonna have to shoot a guy. Besides, If we didn't have guns, crime writers would be writing about bad guys throwing rocks at people and shit. Plus, PLOTS WITH GUNS would be called PLOTS WITH ROCKS. See? That really doesn't work at all.

6. Q) Do you think social networking plays a very important role for an aspiring writer?

A) That was a dumb question. Nobody would be reading this interview that I never would have given without it. (pause) But, the answer to that question is another question. Where would writers in general be without social networking? Networking is the key for an aspiring writer. Even an established writer. Making connections is important and I think the more people feel like they know you, the more likely they are to become interested in your work. I know that's how I feel when I read something by somebody I know, as opposed to a story written by someone I don't.

7. Q) Okay, final question. Have you ever thought about self publishing your novel?

A) That question was almost stupider than your last question. I think about it everyday. But I doubt I'd ever do it. The truth is, I don't wanna be that guy. The guy who's giving away his books at Christmas every year. “Guess you know what McBride's givin us this year? Yep, another copy of that book he couldn't sell.”

Nor do I wanna peddle it at flea markets or swap meets. And truthfully, nobody really thinks of you as a real writer if you self publish. At least that's what I've been told by people that have done it.

By the way, these are the same people giving them away and peddling them at flea markets. Although the social networking aspect from the above question could definitely come into a play as for as marketing goes, I still feel like, on some level, it's taking the easy way out of a hard situation. Anybody with money can pay to be an author, but I wanna have a better novel than a thousand other people. I wanna earn my way into publication. Eventually I will, because I've come to far to turn back now.

Quitting is not an option.