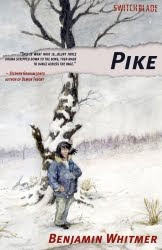 I'm just back from the Lake District. For those who haven't been there, it's a truly beautiful part of the world and it rains a lot.

On the motorway, just before our final turn off, the last services available were at a place called Killington Lake. I like the idea of using that for a name of a character at some point, but if you want to get there first, go ahead - just make sure I get to read the tale.

Being with the family has been a real treat and there's also been something of marathon running in there (now I know how the bloke who walks it wearing a deep-sea divers suit feels). Great to go, great to be back.

Delighted then that, as I come up for a lungful of air, tonight I can put up this piece by Benjamin Whitmer. The air around him smells fresher and cleaner than the Lakes, at least that's the way I imagine it from all the way over here.

Here's something about his novel that I ripped from the ever reliable Spinetingler:

If that isn't enough for you, read the rest of the review at:

Dig the cover, dig the title and dig the interview:

Benjamin Whitmer one and all...


So the first question has to be one that I think we’ve all had on our minds: how the hell did Pike manage to get published?

Well, it started with getting an agent. After I finished Pike I made a list of Manhattan agents and sent out a bunch of straight cover letters asking them to please represent me. I got nowhere, so one night after a few drinks, my wife and I decided to have a little fun with the process. I don’t remember all of what we came up with, but the bio ran:

“I've been a bar-brawler, a factory grunt, a vacuum salesman, a convalescent, a high-school dropout, a graduate student, a semi-truck loader, a small-time drug dealer, a protestor, a gun nut, a squatter, and a petty thief. Right now I'm teaching Ward Churchill's classes at the University of Colorado, and I could stomp a mudhole into James Frey's ass on the best day he ever had.”

All of it was true, of course, and It seemed to work. I sent it out to a five agents on a Wednesday, and by the next Monday I had one phone message and two emails.

Have you ever considered who might play the title character in a Hollywood adaptation of Pike?

Funny you should ask that. About a year ago my editor at PM Press asked me to write up a Hollywood pitch for Pike. She had a bead on an independent crime movie director who was looking for new material. He’s somebody whose movies I like quite a bit, so I had a couple of drinks and banged something out. For the lead character, Douglas Pike, I wrote: “Mel Gibson (with his beard), hopped up on cocaine, booze, and self-hatred, with strict instructions to tap into his inner Nazi.”

The director liked the pitch well enough that he requested a copy of the book, but, as of yet, he hasn’t read it. He’s on a pretty grueling directorial schedule, I hear. Which, as I told my editor, is just how I want it. As long as he doesn’t read it, he can’t reject it, and I get to brag on ever barstool in town that my first novel’s being considered for a Hollywood film.

I’m starting to notice a common theme. If you don’t mind me asking, what’s your favorite color?

And since we’re on the subject of things writers love to talk about, what kind of music do you listen to when you’re writing?

Back to Pike. You got some great blurbs on the book. Were there any that you wished you’d gotten but didn’t?

Actually, now that you ask, my agent had a contact who knew Harry Crews, so he hit him up for a blurb. Crews’ response was perfectly appropriate, something to the effect of: “I’m 74 years old and got my own fucking books to deal with before I die.”

My wife says I should have called him up and said, “Yeah, well my first choice was Larry Brown, but he’s already dead.”

A serious question: was there any one book you read that made you want to start writing?

Actually, yeah, there was. And, more impressive, I even remember what it was. It was Islands in the Stream by Hemingway. I was semi-homeless in my late teens and I had a friend who was starting off playing blues guitar who I stayed with a lot. After reading that book I did nothing but write really fucking horrible short stories and read them aloud to the poor fucker. He was kind enough to never bludgeon me to death with the guitar. He was a hell of a lot more talented than I ever was.

Another serious question: did you know where you were going with Pike before you started writing, or did it just kind of evolve?

I had no idea where it was going. I mean, I thought I did, but I ended up throwing away probably eighty percent of what I wrote in the early stages. That’s part of why it takes me so long to write a book. Better writers can plot stuff out, make plans, do it right the first time. It takes me a lot of rewriting to get anywhere near to whatever initial thought or feeling it was that made me want to write the book in the first place.

One more question. What would Chunk Norris do?

Probably stomp a mudhole in my ass on the best day I ever had. Rightfully.