Dancing With My Friends: ROBIN SPANO 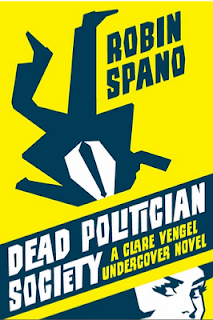 Writers love being interviewed. Unlike most things we say – to our keyboards alone in the dark – with an interview, we know someone cares about our answers.

Nigel tried to rip away that rarely-found confidence and make me ask the questions, for this interview series with writers he calls “Dancing With Myself.”

But I tricked him.

I went on Facebook and set my status as: If you were reading an interview with a crime writer, what would you want to know?

So I know I have at least a small audience, because my friends replied with:

FELICE: I'd want to know about your childhood and if there was anything that would have predicted your future in writing crime fiction.

ROBIN: I think there were indications, like the day I realized my mother was a Russian spy. Only a future crime writer would see a fake smile on her mother’s face and assume that if she was faking the smile, she was probably faking her whole life, and that’s what Russian spies do. I kept a close eye on her for a week or so before deciding that mostly she was sincere; it had just been that one smile. And she didn’t seem to be covering up an accent.

MERILEE: What’s different about your book and why would I want to read it?

ROBIN: It’s different because the characters are the clues.

Clare Vengel, the star of the series, is an undercover cop. Her job is to befriend the suspects and live in their world as a native. At times she needs to live dangerously and gather hard-to-get evidence, but mostly her role is to ingratiate herself and observe the other characters’ behavior.

As a result, police procedure takes a back seat to dialogue and action. There is some tangible evidence, but most of the clues are in things characters say to each other when they’re not even talking about the murders.

The guesswork for the reader isn’t about how each person might physically have killed the politicians (they all have plausible access), but who has the biggest motive, the reason that would compel them into action – and who has the character that would make murder possible.

You would want to read it if you like a fun, fast read that takes you inside a university on an undercover mission to find a killer.

CHRIS: Does the novel blend genres, and if so, which ones?

ROBIN: I’m not supposed to say this because apparently this other genre isn’t selling so well right now, but I think it blends mysteries with chick-lit. Not because I think I write like an airhead, but because I like to balance any dark elements with something light and optimistic.

J.K. Rowling does that with the Harry Potter series – she tackles all kinds of dark and troubling issues, but she balances it with light, so readers are left feeling optimistic and empowered.

Crime writing lets me grapple with dark issues – most of my characters could be killers, and I try to make that credible – but ultimately I’m an optimist and I think the world can be a great place, and I want that positivity reflected in my writing.

Mixing elements – deep with shallow, dark with light – is a cool way of creating layers and deception – you never know quite which level a character is operating on, so the whodunit aspect is enhanced.

NORM: Do you ever sit at the blank page and just feel like killing someone, and then go from there?

ROBIN: No, but now I’m worried about my friend Norm. Actually I’m lying. I was already worried about Norm, and that’s how Dead Politician Society got started. (I wanted to murder the mayor without going to jail.)

MERILEE: What are you trying to accomplish with this book?

ROBIN: Primarily, I’m trying to entertain. But I’m trying to do it in a thought-provoking way – if people want their thoughts provoked, that is. I cover lots of ground that matters to me – some political issues, some personal ones – and if someone reading can relate to that stuff, then I’m thrilled. But if the reader doesn’t relate to my issues, I think the book has entertainment value on its own

NORM: Assuming that women are more left-brain than right-brain, what advantages/insights does Clare have, as a woman, in her crime solving technique and/or thinking?

ROBIN: She has empathy – she’s really good at putting herself in someone’s shoes. She can make friends easily when she has to. She’s also good at finding creative solutions to seemingly impossible problems – though her first impulse is to ram her head into an obstacle, once she sits back, she’s good at finding ways around them. But Clare does have several typically male traits, like a sense of adventure and excellent mechanical skills.

CHRIS: When was the last time you vacuumed?

Want to find out more: