One Man's Opinion: THE STORM WITHOUT by TONY BLACK 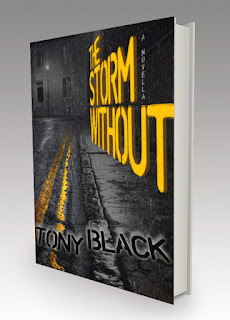 Tony Black’s book ‘The Storm Without’ takes a slight deviation from the police procedurals he’s been releasing of late.


It’s tells the story of a man returning to his home town of Ayr, having made decisions in the past that leave him unsure of his direction in life.


As he arrives in the town, he sees a familiar face, that of an ex-girlfriend.  She’s waiting at the bus stop, so he pulls over to offer her a lift.  The old chemistry hasn’t completely gone and they end up going for coffee.  Turns out her son is being charged for murder and that he needs some help to prove his innocence.


The good news is that our man Doug Michie is a seasoned hard-man who has spent time in Ulster working for the RUC in Belfast.  It means that when the trail leads him to some powerful and dangerous people, he’s not entirely out of his depth.


There are many things in this book that will seem familiar to fans of lone-wolf detectives and private-investigators.  These will make you feel very much at home.  You may get whiffs of Ken Bruen  or fleeting moments of déjà vu from older stories.


How then, does Black make his character stand out from the rest?


Michie is partial to Robbie Burns.  He knows his work and likes to quote him from time-to-time to illustrate his thinking.  He’s also a guy who pays attention to the world and will use the things he remembers to illustrate his points.  And he’s a pretty reflective sort, finding that returning to his home town raises questions about his life, his value to the world and his mortality.


It’s also slightly different in that this was first released in serial form.  This has some impact on the style and means that new chapters occasionally revisit previous ones to make sure the reader is clear about where they are in the story.


Telling a story in the first person isn’t an easy thing; Tony Black pretty much gets the balance of introspection and action right.


‘The Storm Without’ is another example of Black’s talent and it’s a rather pleasing tale.  If you’re short of holiday reading this summer, this book will certainly help to fill the hole.

A welcome edition to the Blasted Heath collection.

It's available in kindle format (Amazon US and Amazon UK) as well as a paperback.

And a wee reminder for you that you can still pick up a copy of Pulp Ink for nothing just now:
Amazon UK  Amazon US

Thanks to all those who've supported the collection so far.
Posted by Nigel Bird at 14:37