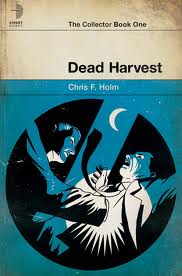 There’s a lot of class in the writing of Chris F. Holm.  Read his short works in ‘Eight Pounds’ or his entry in ‘Pulp Ink’ and that will become immediately obvious to you.


Stepping up to writing a novel that’s going to engage and maintain the interest of the reader is a different matter entirely.  I was confident Chris was going to pull it off, but one can never be sure.


Apart from loving the author, I must say that it was the cover on this book that clinched my purchase.  It’s retro-chic with scratches to boo.  It shows a guy reaching into the chest of another man within a circle of light.  If I had a pound for every person who came up and expressed an interest in it and then told me they thought it was a second-hand classic, I’d be at least £20 better off.  Maybe I should have charged.


The story is slightly outside my usual reading selections in that it involves souls and heaven and hell.  Quite something to attempt as a debut novel, that’s for sure.


Sam Thornton is the protagonist.  He’s a collector.  He picks up the souls of the damned and delivers them upon request.  I suppose he’s a kind of bounty-hunter of sorts, only there’s no bounty and the guilty are always going to be unsuspecting.  The book opens with him at work, the inspiration behind the cover image.


Job done, Sam’s given another job.


This time it’s to collect the soul of a young girl who’s brutally murdered her family.


Problem is that when he reaches in to take her, he senses that she’s innocent.  That being the case, he decides he needs to go against his bosses and save her – taking back an innocent soul will spark off a major war between Heaven and Hell, so it’s imperative that he does the right thing.


The right thing’s not easy to fathom, however, and it’s made a lot more difficult given that when he runs away with the aforementioned girl he becomes the most wanted of the police, the angels and demons alike.


What follows has the feel of a classically, hard-boiled, detective story that is full of the supernatural and has the energy of a chase thriller.  And you know what? Chris pulls it off really well.


There’s a lot of information to take in at various points about the types of spirit entities that exist.  Like pieces in a chess game, each has its own moves and rules.  Some need bodies.  Others have no free-will.  They have different strengths and weaknesses.


Thankfully, these points are made with as little fuss or strained exposition as it’s possible to imagine.  Sam keeps having to explain things to the girl he’s helping and to some of the people who help him along the way.  What is important is that the rules were set and remained consistent, so that there was no confusion as the plot unfolded.


Another aspect of the tale, possibly my favourite one, is the story of how Sam became a Collector in the first place.  It’s woven through the chase tale and gives the inhuman collector a very human feel.  It’s a short story of sorts and I’ve already pointed out that Chris is an artist in that field.


I found the book to be extremely entertaining, often gripping and always kept me on my toes.  I was also very satisfied and rather surprised by the resolution of the book.  Which makes it a damned good read.


The good news is that this is the beginning of a series and the opening of book 2 is at the back of Dead Harvest.


My advice is that you should pick up a copy of this opener and I’m pretty sure you’ll give the follow-on serious consideration when it’s released.
Posted by Nigel Bird at 22:53