But What Does It All Mean? 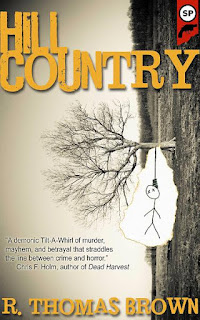 But what does it all mean?

I don’t tend to speak much about what a story of mine means. Some of that is my belief that a story means whatever it means to the reader. A writer can intend a meaning, but that’s not the same as ensuring that meaning. The more personal reason is that I’m never quite confident enough to tell people that my tale of flight and violence has a deeper meaning.

Well, in a small way, I’m going to step away from that. HILL COUNTRY is, for the most part, a thriller. It involves crime, running, danger, death and a good dose of fear. It’s meant to be a fast read and an entertaining one. If it meets that goal, and means nothing, I’d be happy that a reader enjoyed themselves.

That being said, there were some ideas that stayed with me as I wrote. One of them is the fight for control. All the characters in HILL COUNTRY strive to take charge of their lives. This is most directly expressed in the antagonist, Tyler who commits all manner of atrocities in an attempt to control his environment and the people around him. But it’s not him alone. Gabe struggles to get ahead of the enemies that seem to be all around. Abby uses any tool she has to escape a dependent life.


I, and I think most people, have this drive as well. We’re battered with it. Take charge. Seize the day. Make your own destiny. It’s a constant, and in some ways noble goal. However, the people of Comal Creek, TX learn over the course of the book that it’s a sometimes vain pursuit. You can’t control everything, and the rigid demand for total control leaves you unable to adapt and survive.


I didn’t really intend to convey all that in the story when I started. But as I created the characters, and filled them to some extent with my own experiences and thoughts, it just came out. It’s something that I will keep reminding myself of in many aspects of my life, but especially writing. There is so much about the business of writing that I cannot control. If I were to try, it would likely lead to disaster.

Hill County brings together the amazing R Thomas Brown with the force that is Snubnose Press.

Recommendations for Hill Country include:

"A demonic Tilt-A-Whirl of murder, mayhem and betrayal that straddles the line between crime and horror." - Chris F Holm, Dead Harvest

'“In Hill Country, R. Thomas Brown has written an edgy tale full of passion and human fallibility. The story bounds along at a breakneck pace, unrelenting and painfully real. Its cast of characters run the gamut, from broken to brutal, from raw as an open wound to cold and dark as a winter midnight. When you start this tale, plan on not putting it down till you’re done, and while you’re reading, don’t forget to breathe.” – Bill Cameron, County Line

I can tell you that I love Ron's writing and that I've bought my copy.  It won't be long until I'm there myself and I hope you'll come and join me so you can decide how my reviewing skills are shaping up when I get round to that.
Posted by Nigel Bird at 11:15