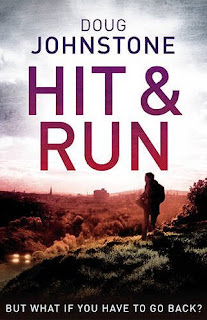 I was in a bookshop on Thursday.


That shouldn’t sound shocking, but it’s been a while.


The reason for the visit, the launch of Hit And Run – the new novel from the excellent Doug Johnstone.


If you’ve never read one of Doug’s books or seem him at an event, I’d like to recommend both to you.


Hit And Run sounds like it has all the ingredients for a fast-paced noir thriller and the first chapter certainly has got me hooked.  The opening has a partying trio taking the long way home to avoid running into the cops on drink-driving watch.  Unfortunately for them, they run into something else, and there’s a sense that things are just about to move from bad to really bad with the next turn of the page.


Not only that, but Doug sang a couple of songs.  The first I liked, the second was a real humdinger about Bjork and car-crashes.
On top of that there were laughs aplenty, so it was great entertainment all round.  Make sure you get yourself a ticket for him for the Bloody Scotland festival if you're around for that.


Walking out afterwards, I had a look at the shelves.  There was something warm and familiar about them, packed full of books as they were and in neat order.


It was only when I got to the front door that I realised that there was no FREE BOOKS table.


No free books?  How do Waterstones (without the apostrophe these days!) expect to survive if they’re not giving everything away?


It’s an interesting idea, the Kindle Select programme.  Put in your book, let it be borrowed and be paid for that and have access to the facility of the giveaway.


Now, I’m a mean guy.  Mean in the saving money where I can way.  Truth is I have to be if I want to be able to pay for my children to have some of the brilliant experiences that are on offer to them – theatre, cinema, music, football, workshops, soft-play, swimming club, Rainbows and Brownies, you may know the kind of thing.


In the supermarket, if it has a reduced price sticker on an item because it’s on the verge of disintegrating in the fridge, you’d have to hold me back to stop me putting it in my basket.


Books are my biggest indulgence these days.  My shelves are packed to overflow and regular culls don’t seem to make any difference.  They’ve been stocked by titles from Amazon, charity shops, car-boots, jumble-sales for as long as I can remember.  Not even becoming a kindle user has completely changed my habits and I still can’t resist the odd tree-book now and again (take Dead Harvest by Chris F Holm, for example, how could the electronic version do that cover justice?).


Now I have a couple of new syndromes.


The first is called ‘Free Kindle Download Syndrome’.  I see a book I want or think I might want and press click as soon as I see it’s going for nothing (not even for a song!).


The second is ‘Giveaway Syndrome’ where I keep having the urge to give books away for nothing.


I have another title going for free today.  I’ve enrolled ‘With Love And Squalor’ again to the Select Programme and it can be downloaded for nothing over the next 3 days.


To be honest, I’m not even sure myself.


In part, it’s down to the desire to be read by as many people as possible.  More downloads should equate to more readers even if only a fifth of them are actually opened.


Another part is the sheep mentality.  Everyone else is.


I’m also keen to sell books.  My fantasy is that at some point in the future I’ll be able to swap my hugely stressful and demanding  teaching job, a job that is killing me softly, for a part-time one that allows me space to write, the two complimenting each other so that I can make enough money for the roof, the food and all of those clubs.


The idea, give some or lots away for free, sell a few and maybe get some traction.


There’s nothing wrong with any of those things.


I do wish I could be more like Pablo D’Stair and his idea of just giving it all away for nothing for as much of the time as possible.   I admire his views and his writing.  Thing is, that leaves me in the ‘killing me softly’ job for eternity.


My worry about all of the free books thing is one that’s no doubt been aired all over by now.  If every book is free for a certain period of time, won’t people eventually stop paying for books?  It’s not stopped me yet, but if I manage to reign in my enthusiasm at some point surely the rational thing is to do that.  Stop buying.  Be canny.


I guess Amazon know what they’re doing from their side.


If a book has 20,000 giveaways and everyone raves about it, then the book will have to be bought in retrospect.   But won’t it be available for free to the Kindle Prime folk?  And won’t that persuade us all to join it eventually?


So, the big books will be borrowed and the best-selling authors will do fine.


And that leaves the less well-selling folk.  Maybe they’ll do OK, but not as well.


Then others will fall by the wayside.


Isn’t that the way it’s always been.  Is this a speedy evolution back to some form of the status quo?


There are differences, I know.  The status quo didn’t have the self-published before.  There might have been a more diverse platform in terms of where people shopped.  We had to move and mix in the world to buy our books and chat to people in the shops and find out what was going on in the book-world of their lives.


Don’t get me wrong, I’m still embracing the e-book world and its possibilities, I just get nervous about it all from time to time.


If you’ve seen an analysis of this that makes sense, could you please drop in a link in the comments for me.  I really would like to find some informed opinions.