One Man's Opinion: ABIDE WITH ME by IAN AYRIS 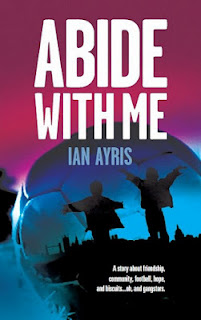 I love the writing of Ian Ayris.  His short fiction is outstanding, packed with images and always tapping nerve-ends and ripping at heart strings in ways that many don’t even come close to.  I like his work so much that when Chris Rhatigan and I had to think of Deringer nominations from the Pulp Ink anthology, we came to immediate agreement that his story, Surf Rider, should be one of them.


Little wonder, then, that I had high expectations for his debut novel ‘Abide With Me’.


High expectation's probably not a good think for anyone to hold for too long, whether that be in sport, books, art, exams or whatever it is you’re hoping for; there’s always the possibility that things will end in disappointment.  Tears and heartache.


The good news for me on this occasion is that Ian has earned every one of the five stars I’m giving him for the book at least twice over.


It has a density to it that is slightly unusual.  Everything is packed tight.  It took me almost two weeks to read the 150 pages.  My slow pace is for a couple of reasons, I think.  First off, for much of the book there are no end-of-chapter hooks that forced me to read just that one more chapter before moving on.  Secondly, the level of emotional reaction I was experiencing at each visit meant that I needed a break after a short while to catch my breath.


So here’s an idea of the book, but not too much as it’s far too good to spoil.


Johnny and Kenny are lads who grow up on the same East London street.  They’re pals, but not in any ordinary way, as Kenny is unable to communicate effectively using words.  Kenny is the Lenny Small in ‘Of Mice And Men’ or To Kill A Mockingbird’s Boo Radley of this book.  He’s terrorised at home and he seems to find little comfort in life other than from what he sees in the street-light outside his window or from the writing he does in his notebook.


Johnny, on the other hand, has street-smarts, charm and a settled family life, part of which involves supporting the Hammers through their footballing highs and lows.  It’s claret and blue blood that runs through the veins of Johnny and his dad, that’s for sure.


Ayris takes a journey inside the capsule that is Johnny’s mind.  He’s our filter.  We get to feel what he feels and see what he sees.  It’s a recipe for the best of Ayris – Johnny witnesses horrible events and feels terrible pain and confusion – and as I reader I felt every moment of hurt, misery, pain, hope and happiness that came along, sometimes sent by Santa Claus and others by Satan.


The first half of the book follows the school days.  Shows the roots of the damage to the people in Johnny’s life.  It’s dense.  It’s very internal.  It would be difficult to film as so much of it is thought and emotion.


The next quarter isn’t dissimilar in style and follows Johnny into early adulthood.  Suffice to say, he’s harvesting the fruits of earlier misfortunes.  It’s powerful.  Begins to suggest that the ending might just be something special.


The last 20 pages or so of the book take on a completely different quality.  They rattle along full of tension and a real need to find out what the climax of the book is no matter how scary the prospects for our duo seem.  Truly brilliant.


But could it be better still?  Can his second blow even this out of the water?


I think yes to both of those.


As I came to the end and relaxed my white knuckles, tried to stop myself crying in pubic and fell back into my seat to take it all in, I decided that all my thoughts regarding improvements must be wrong, that it could only be this way or I’d not have had such an atom-bomb of a reaction at the end.


Now I’m writing about it, I’d like to share those thoughts.  Keep in mind that sense that maybe the book needs to be just as it is as you proceed.


There’s credit due to Caffeine Nights for snapping this up and taking a chance on such a talent.  I think they’re on to a winner and deserve every success for that.


The cover blurb.  ‘A story about friendship, community, football, hope and biscuits...oh, and gangsters.’  I wasn’t keen on it when I read it and I’m less keen now.  It’s a far better book that the sentence suggests.  There’s no need to be coy – this is dynamite.


Swearing.  I mentioned ‘Surf Rider’ being a gem of a story.  It is.  And it has lots of swearing.  The swearing adds.  Here, I’m not sure it’s the same.  There’s a lot of it and I found it distracting.  My edit would have taken most of it out to leave it with power when used and also to help the book to sell to a wider audience.  I know it might be said that the artist’s purity is of paramount importance, but this is the first time I’ve ever felt less swearing would be a bonus.  It’s also going to limit the audience for the book and that’s just not right.  ‘Abide With Me’ deserves to have a really high profile.  A less sweary book will have a far bigger chance of strong circulation.


The next one isn’t so straightforward.


As I said, the book has a very intense, moving, powerful and emotional opening as we get to know about these kids.  And then we have the climax – all energy and action and magical tension.  It’s like ascending a big mountain in a good way – it’s a steady climb, great views along the way, challenging and satisfying and then as soon as you get to the top there’s a sprint down the other side full of exhilaration and acceleration.


I guess there are possibilities.  One might be to shorten the build up.  Another might be to start the book at the action at the end and maybe leave it as a novella.  A further option might be to start at the adult stage and put in the childhood as back-story.


In the end, I think it’s called right.  Leave it as it is and let the people come, for they should.


It’s a cracking book.  A book that deserves every success.  I hope that you’ll read this and go straight over to buy it – if I haven’t at least made it seem interesting to you, then I’ve failed in my intention.


Ian Ayris – this boy’s going far.
Also available in the US.

And ps - WITH LOVE AND SQULOR is free over the weekend.  Happy Birday.
Posted by Nigel Bird at 10:10