One Man's Opinion - ALL THE YOUNG WARRIORS by ANTHONY NEIL SMITH 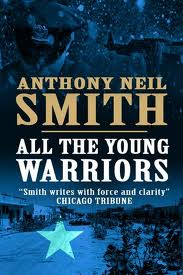 Anthony Neil Smith’s ‘All The Young Warriors’ (UK) is a little like one of those bullets that leaves a small wound on entry and exits the body to leave a gaping hole.  Opening with small town events it expands to deal with war, world politics and piracy and doesn’t miss a beat along the way, making this a novel worthy of a place on the shelves of noir fans on the one hand and of an airport lounge on the other.  Any justice and it might even make it to the DVD shelves somewhere along the line.


In order to create the pull needed to get you in, a strong opening is required and Smith does this like he’s the world’s strongest man.


He sits two cops in a car.  It’s snowing and there’s not much happening.  A car drives past erratically and the cops go in to investigate.  All should be sweet and smooth.  The lady cop, pregnant by one of her colleagues (Bleeker), goes along against her better judgement.  Turns out they’ve stumbled into two young  Somalians (Jibriil and Adem) off to fight for their homeland.  One of them, slightly crazy and fuelled by his commitment to the cause , pulls out his gun and starts firing.  It’s the end of Holm and Poulson and the end of Bleeker’s chance at fatherhood.


This is so well written that it instilled in me a powerful sense of the need for justice. Jibriil, the man responsible , had to pay.  Had to be tracked down.  Needed sorting out for good.


Fortunately for me, Bleeker happened to agree with those sentiments.  It became all he had to live for.


Out of need, Bleeker teams up with Adem’s father, ex-gangster and reformed hard-man, a man who set himself on the path of the straight and narrow so that his son might follow along.


Here is a buddy team that’s perfect for the ride.  They conflict in their religion, culture, status and motivations in a way that means there’s always an edge to what they do.  On the other hand, they have enough in common to cement their relationship, enough to make me care how things panned out.


Jibrill and Adem provide another buddy team.  They also have conflicts, but the only cement they have is history.   When they reach Somalia - a madly hot, anarchic place - the two switch roles.  Jibriil finds himself in his element, Adem like a fish out of water.


The first half of the book has a hell of a pace, the action moving swiftly on, yet all the while there’s an undercurrent of thoughtfulness, ideas that need to digested no matter how unpalatable.


Just before the mid-point, things settle for a while.  Smith centres the action by immobilising Adem and Bleeker in different ways – one wrapped in bandages like a mummy, the other hiding away in his ice-fishing hut.


It’s almost like the story has formed a chrysalis for a while.


When it emerges, it is as a new and wonderful creature.


Adem finds himself using his skills to become a negotiator for Somalian pirates and takes us into that bigger world I mentioned at the beginning.   However the book was to pan out from that point, the gaping hole in someone’s back was inevitable.


Not only did I really enjoy this one, I was very impressed by the writing.  Crisp and sharp from beginning to end it paints pictures that are vivid without over-describing at any point.  The horror of situations is real and very immediate.  Smith had me right in the middle of the action one minute then taking me further back to soak up the view from a new perspective the next.


The contrasts are huge right through, from hot to cold through black to white.  They do the job tremendously well.


I don’t know how much research was done for this.  It’s not easy to tell.  I did come out of the other end feeling like I knew more about what happens in the world than when I went in.  I also came out fully satisfied.


It’s a great piece of work from the off and should go down as a must buy if you’ve not done so already.