UNCLE MILDRED AND OTHER STORIES 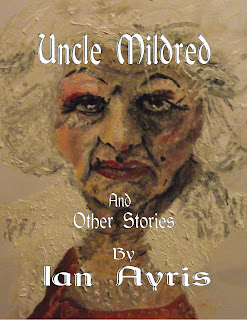 In two months, my debut novel – ABIDE WITH ME – will be officially launched. I wrote it a couple of years ago now, and it's been a long journey. Once I'd finished writing AWM I submitted it to publishers and agents, you know, the usual thing. And I was kicking my heels, checking the post, driving myself mental with expectations of disappointment. But, hey ho, turned out all right in the end, as the late great George Formby might have inaccurately paraphrased himself.


But I am not here to talk about ABIDE WITH ME. You see, whilst waiting for news of the book, I began to chance my arm at writing a few short stories. In the last couple of years or so, I've had almost forty published both online and in print. Took me right by surprise, that did. To me, it was just writing down whatever popped into my head, going with it for a while, then placing a full stop at the end. Listening to the voices day and night. Mad, but it seemed to work.


With AWM almost ready, I thought I'd clear the decks, jump on board that rocky old driving train that is self-publishing. As pretty much all my stories had been published before, I intended to throw this one into the pot as a freebie, a thank you, if you will. My stories are in so many different places on the net and in books, for my own satisfaction I was looking forward to putting the best of them together in one place. So freebie it was going to be.


But then I had this idea. A jab in the side.


I'd had stories published in BRIT GRIT TOO and OFF THE RECORD – short story anthologies of the highest order, I'm sure you'll agree. And hats off to PAUL BRAZILL and LUCA VESTE respectively for getting those off the ground. And these two fine publications are for charity. The mark of our small writing community, that is. Remembering BGT and OTR was the jab in my side I needed.


Five years ago, my little sister – Lou – was diagnosed with an aggressive form of breast cancer. Ripped us all to the core, it did. She was a twenty-four year old mum to three brilliant boys all under the age of five. Like I said, ripped us to the core. A year later, my mum and my aunt were diagnosed with breast cancer also. Was a hell of a year. Thanks to the incredible courage and fortitude shown by my sister, my mum, and my aunt, and the rest of our family, all three are now rid of this insidious disease. My sister now has a fourth littl'un to look after and having almost completed an English Lit. degree will begin training to be a teacher later this year.


So here's the thing.


Without the unbelievable care, compassion, knowledge, and expertise of the medical professionals that treated my little sister, my mum, and my aunt – from nursing assistants to consultants they were all magnificent - our family would contain nothing but broken people. Blimey. Just got a load of tears in me eyes thinking of that. Sorry.


But a massive part of the fight against cancer the world over is the work carried out by charities such as Cancer Research UK and The Breast Cancer Charities of America. They are in the vanguard, the charities. The front line. From research to the support of sufferers and loved ones, their work is immense. And these charities exist purely on donations from good hearts. Without donations they would fold. It's no more complicated than that.


So the idea of a freebie went right out the window, and I set about collecting the best of my stories together. My sister-in-law, Rebecca, a talented artist in her own right, offered to paint the cover – and what a cover – and things were ready to go.


Added to the fourteen previously published short stories, is a bonus story – THE RISING OF LEN MUNCH – soon to be published in RADGEPACKET VOL. 6 under the title SHADOWS IN THE RAIN. Out of the fourteen other stories, SMALL PRINT is in this years MAMMOTH BOOK OF BEST BRITISH CRIME, alongside such luminaries as Mark Billingham, Val McDirmid, Ken Bruen, and Peter James, as wells as my old muckers Col Bury, Nick Quantrill, and, or course, our Nigel here, and there is also SURF RIDER – a story that has been longlisted for one of this year's Derringer Awards.


I know times are hard and money is tight, but if you like your crime and noir with a twist and a quirk and a wayward bent, hopefully you'll enjoy the stories in this collection.


Thank you for your time, as they say. If you know of anyone who might be interested in contributing to such a worthy cause, please share this link around. Thank you.


And Nigel, you have proved yourself a fine and true friend for inviting me to stand on my little soapbox here. Cheers, mate :)
UNCLE MILDRED AND OTHER STORIES IS CURRENTLY AVAILABLE TO DOWNLOAD FROM AMAZON UK AND AMAZON US.

ALL PROCEEDS FROM THE SALE OF THE BOOK WILL BE DONATED TO CANCER RESEARCH UK, AND THE BREAST CANCER CHARITIES OF AMERICA.

Sea Minor - Ian has a style of writing that makes him one of the best authors in the short form I know. I recommend it without reservation.
Posted by Nigel Bird at 12:44