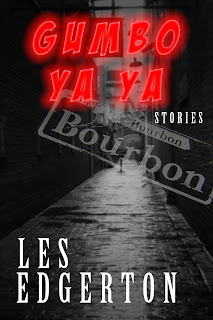 So, I said to myself… “Self?” And had no answer that wouldn’t get me locked up if someone saw me talking to myself…


Okay. Let’s give this a try. I think what I’ll do is ask myself the questions I wish others might ask me and don’t.

Absolutely. I rarely answer to Beulah or Jim-Bob, so that’ll work out well. I’ll be more alert to your questions. If I suddenly quit answering, it’s because a couple of guys in white coats carrying butterfly nets just showed up…

You’ve just published GUMBO YA-YA with Snubnose Press. This is your second story collection. Your first, MONDAY’S MEAL, was with The University of North Texas Press in 1997. Why so long between collections, especially since that book came out to rave reviews in The New York Times where they compared you to Raymond Carver, as well as garnering great reviews in Publisher’s Weekly and others, and contained stories that were nominated for a bunch of literary honors? Not to mention selling out the press run?

I guess these aren’t going to be short, “yes or no” questions are they! Several reasons. One, I kind of quit writing short stories to focus on novels and screenplays. There was just no money in short stories and I wanted to focus on work that paid. Second, until the e-book revolution, the rule of thumb with publishers was that a minimum of half the stories in a collection had to be published previously in prestigious literary magazines. Since I wasn’t writing many during this time, they weren’t being sent out. Most legacy publishers won’t publish collections simply because there’s no money in ‘em. With the e-publishing revolution, because of the less expensive cost of production, collections have suddenly become viable and profitable. Even though the requirement of prior publication isn’t an issue with e-book publishers, I’m old-fashioned and for myself still want to adhere to the old standards, so wouldn’t submit a collection until most had been previously published. And, all but one or two of these have been. Also, years ago when I was writing short stories, they were harder for a lot of reasons to get published and there were far fewer venues available. And, then, a couple of years ago or so, I began to get requests for stories and the money offered was decent, so I began writing a few again. One of the most positive effects of the e-book revolution is that short stories are experiencing a rebirth in popularity.

Do you rewrite much?

I hope none of my writing students read this as I constantly tell them things like, “Writing is rewriting.” I tell them this with a straight face and with a serious mien. But, the truth is, I rewrite very, very little. Most things not at all. I write very carefully the first time through and edit as I go. I’m not one of those writers who “slap it down and go back later and fix it.” I’ve found that when I do that, I forget what I was going to fix and that little note on the margin that says “rewrite this” is meaningless at this point. I get the perfect word at the time and I get the effect I wanted or I don’t go on until I do. Plus, I’ve been doing this a long time and I’m pretty good at it. Writing is kind of like riding a bicycle. When you first begin, you have to consciously think of a bunch of things. You have to remember to pedal, to steer, to balance, and probably some other things. Once you’ve learned to ride a bike, you don’t have to think about it any more. You just ride the damn thing. That’s where writing is for me—I just ride the damn thing. I don’t have to worry about the structure or any of that—I know structure just like a bicyclist knows how to steer. I think some writers are naturals and others have to learn to write on a much more basic level. Doesn’t mean the output for one is necessarily better than the other—just different ways to learn to ride the bike. I’ve found that the earlier in life one became an avid reader, the quicker they’re likely to become a good writer.

Also, I worked as a reporter for several years. A sports reporter (don’t laugh), and I covered lower Michigan and northern Indiana high school sports and Notre Dame football and basketball. Every Friday night, I wrote more than 40 stories in a two-hour period. You can’t be thinking about pedaling, steering, or balancing in a job like that—you just have to ride the bike… or they take your Schwinn away from you and give it to someone less dumb than you are. And they don’t want cookie-cutter, clichéd stories—they can get those anywhere and cheaper. Newspapers want some originality, unless you’re working for the Neighborhood Weekly Shopper. I worked for a top paper, renowned for its toy department (sports), The South Bend Tribune. Our main beat was the Notre Dame football team, one of the top programs in the country at the time (Ara Parseghian era). The Chicago Tribune and both coasts’ Times took our stories. Great training.

Why do you write?

Why do you breathe? The answer to both is the same. You quit… and you die. Or might as well…

What are your favorite stories in GUMBO YA-YA?

I like all of them, but if I had to pick my favorites, it would be the first and last stories. “Best of Friends” and “In the Zone.” Both are largely biographical and bring back great memories. And, I think they represent my best work. I’m proud of all the stories in this, but particularly proud of those two. I’m looking over what I just said and just thought—that was dumb! Why would I include any story I wasn’t proud of? Of course I’m proud of ‘em! I’m also proud of the essay at the end, “Censorship and Why I Love Charles Bukowski.” It was written in the nineties and blasted the concept of political correctness when others thought it was a good idea and I felt it was out-and-out censorship. I feel I’ve been proven right and the world is exactly where I thought it was heading. Fucked up. Now, do you want to hear what I think of the Mayan prophesies…? (Hint: No worries…)

What else is going on, book-wise?

Of course, GUMBO YA-YA. I’ve also got three new novels out that are doing well. StoneGate Publishing put out JUST LIKE THAT and THE PERFECT CRIME and both were an absolute labor of love. And, Bare Knuckles Press brought out THE BITCH which is my best novel to date and I love every word in it. I think in its way, it’s a ground-breaking novel. My secret dream… well, I guess it’s not a secret now… is that somebody in Hollywood that can make a decision reads it… I think it’s the most cinematic of all my work. If anyone knows anyone I can send it to, lemme know!

What makes me feel good about all of these books are the reviews they’ve all received from the people I respect most in the world—other, quality writers who know a good book when they read it… and don’t blurb or review if it sucks. The folks we see on this site.

Where do you go to improve your craft skills?

I have the TV on the BBC America channel most of the time, and I tune it out most of the time—it’s just white noise—except when Chef Gordon Ramsey is on. I pay attention to his shows as they’re the best classes on writing I’ve ever found. If you substitute the word “writer” for “chef” every single thing he says applies to writers. He cuts through all the bullshit and doesn’t allow for excuses. He insists on his charges always performing at their highest level and doesn’t mollycoddle them with false praise and crap like that. He exposes pretenders. He has standards and accepts no substitutes. He approaches the craft of cooking like I try to approach the craft of writing, both for me and for my students. He’s got it right. He knows that if your goal is to make money in your restaurant, you first have to make your food the best you possibly can. He doesn’t tell the people he rescues to blog, network, market, advertise, Tweet, or any of that. He has a simple message. Put out a great product. The money will follow.

I think many of us forget that in the e-book universe. As well as in the traditional print universe. I recommend all of my students watch his show and think of him as teaching writers instead of restaurateurs and chefs. Try it. You’ll be amazed at what lessons he drives home that you can use for your writing.

Thank you so much for this opportunity, Nigel. One word of advice—I’d look for better interviewers… This guy’s terrible! He never once asked me about my amazing sex life!

Now. Run out and buy my books. You owe it to yourselves!
sea minor - You surely do.  UK buyers here.  US here.