Kick It Together: GEMMA DIXON 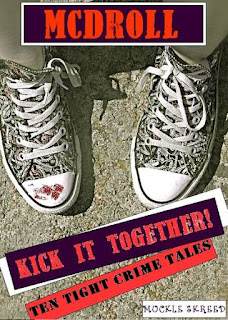 Kath: So how’s the career going?

Not bad actually since I started with the CID; I really love it, most of the time, although some of the men can be a bit of a pain to deal with but I think I’ve got their measure! It’s been interesting but I’m still very shocked at some of the cases I get involved in; wee girls going missing ending up murdered and all sorts of perverts on the prowl just waiting for a chance. Ordinary people wouldn’t believe how prevalent that kind of thing is. Some of the older guys just say society is getting sicker every year. They blame it on the Internet giving the nastier elements in our society the opportunity to find each other easily and communicate. Make me mad.

Kath: So how do you deal with that at the end of a particularly gruesome day?

Well, it would be easy to just head to Tosco’s and buy a nice wee bottle of red every night you know. I could just kick back in my flat and throw it down my neck until I was out for the count, waking up to find the telly still blaring at me with a mouth like a toilet brush but that would be too easy and predictable. I wouldn’t be the first on the force who went down that road. And anyway, with my health it wouldn’t be a good idea anyway, would it?

No, instead of that I give some time to a local group who try to help people with their reading and writing skills. It’s very rewarding.

Kath: How did you become involved with that?

It was one of the cases at work. A wee chap with Down’s Syndrome had gone missing on his way home from work where he stacked shelves at the supermarket and so there was this big search for him. We finally found him down in Lauderdale Park. A gang of neds had dragged him there and roughed him up pretty badly, leaving him down by the duck pond. Poor guy had no idea where he was or how to get home so he just sat there and waited for somebody to find him. His name’s Tom and he was very frightened and freezing cold. It was a downright shame.

Anyway, I got chatting to Tom’s mum and she told me a bit about Tom and how proud she is of him and the group that he goes to and how he’s trying to write a book. She said they were looking for volunteers and that if I was interested I should go along. So I did and I really love it. I don’t help Tom but an older guy called Harry who’s got an amazing imagination and I help him put his ideas down onto paper. We’re writing a science fiction book about the first aliens who make contact with humans. It’s a bit daft but he gets such a kick out of it and I’m incredibly proud of him.

Kath: How does this help you Gemma?

Well, the strangest thing happened. I met this writer there, she’s actually a Head Teacher of a primary school, but she writes crime stories in her spare time. We got chatting over a cup of tea and blimey, she had a lot of questions she wanted to ask me about my job! We get on really well and so after a few weeks she asked if she could write some stories about me because she thinks I’m a great role model for young girls, you know, the way that I’m making it in a man’s world and how I don’t let men get the better of me and all that.

So now as well as helping out at the literacy group, I meet up with her, McDroll is her pen name, bit of a stupid name if you ask me, but anyway, we discuss what I’ve been up to and how I handle the guys I work with and then she goes away and writes a short story. She brings it along when we meet the next week and lets me read it to see if I agree with what she’s written, to see if it’s accurate and then she’ll make any changes that I want! I told her about that time I had to dress up like a prostitute and hang about on the street with these huge white high heels and the long red wig. She thought that was hilarious and she wrote a very funny story about it.

Kath: What does she do with these stories?

She publishes them and you can buy them on Amazon! You know she changes the details of course and calls me ‘Gemma’ but at the end of the day, the stories are true and I get a real kick out of reading them. Her latest collection is called KICK IT TOGETHER, ten short stories. I’m not in all of them but quite a few. Do you remember that old dear that made the soup? She’s in it; still makes me want to heave!

She writes other stuff too. I just read her new one called THE WRONG DELIVERY. I think she’s going to publish it a bit at a time. This first part’s called ‘Corrin’s Eyes.’ It’s a crime story too but quite funny as well. I found it funny anyway; she has a way with words that one! It’s set in Argyll, which is a bit in the back of beyond even in Scotland. This young couple just goes to pieces because they are not very satisfied with their life anymore and things just go from bad to worse to awful! I like that kind of story, makes you feel as if you are going down a roller coaster with no breaks on and you can see the crash coming up ahead but there’s nothing you can do to avoid it.

Kath: You seem to have very positive attitude just now. Do you think being able to talk about your experiences helps?

I’m sure it does. After the attack, I didn’t think I’d ever be able to do the job I love. With the months of the physiotherapy that I had to get back on my feet and the hours of therapy to build up my confidence again made me think at the time that my life had ended. Being in these stories makes me now feel that I’m doing a really important job and that all the pain and effort has been worthwhile. My injuries were so bad; I might not have been here at all today. Now I just take everything a day at a time and try not to think about the future or the past, but instead just try to enjoy each moment for what it is. There’s none of us know what’s waiting to slam into us round the next corner; I certainly didn’t. But everything’s going so well now and I can actually say that I feel happy. I don’t get the night terrors so often, maybe only a couple of times a month and I can pretty much deal with that myself now.

Kath: That’s great; I’m delighted with your progress. I think that’s enough for this session and I don’t think I need to see you for another six months. If you need me before then you can make an appointment but you are doing so well, good on you girl!

Thanks, I’m pleased too. Thanks very much.

McDroll writes crime fiction with a strong hint of noir and a slosh of humour. She lives with her family in Argyll, Scotland.
Her stories have appeared in Shotgun Honey and the Flash Fiction Offensive. She has been published in the charity anthologies Brit Grit Too, Off the Record and The Lost Children. She has two new indie published books, Kick It Together and The Wrong Delivery.

Her book reviews can be found at http://imeanttoreadthat.blogspot.com/
Posted by Nigel Bird at 14:11