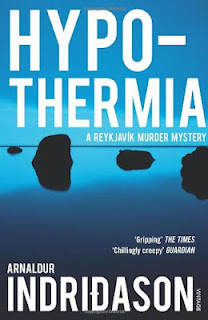 'Hypothermia' is well named.  There’s something chilling about the investigations of Detective Erlendur that runs from the first page right through to the end.

This book was my introduction to Erlendur, and I found him to be rather engaging.  To try and post reference points to the uninitiated, I feel that he combines elements of Maigret and Columbo; the thoughtful country-boy working tirelessly and skilfully in the big city combined with a terrier-like erosion of the people involved.  Throw in the rational, obsessive mind with cold blood passing through the veins and you have a fictional detective of a very high calibre to enjoy.
Here's one of the skills he's learned over the years:
'The rule was always to accept coffee if it was offered...'
It's a tip he passes on to the younger detectives, a small measure as to their capacity to do the job:
'...Elinburg had been quick to learn this.  Sigurdur Oli still hadn't grasped the concept.'
It's the kind of subtlety that helps to make a book worth reading.


'Hypothermia' opens with a suicide.  It’s an open-and-shut conclusion as far as the police are concerned, yet Erlendur is uneasy with the case.  He wants to know why the tragedy happened, needs to explore the story behind the death.


As he does unpeels layers, he uncovers ghosts.  There are the ghosts in the mind of the victim, the haunting tones of a series of unsolved missing persons investigations from decades earlier and there’s the ever-present spectre of his dead brother.
Through visits trawling the stories of the past and the lakes of Iceland, after mystics are consulted and evidence unearthed, the plot-lines are sewn together skilfully so that they have a symbiotic relationship which offers a hugely satisfying read.
If I were to have a minor gripe, it would be to suggest that the translation does not always run smoothly.  I can’t be sure on this as my Icelandic is non-existent, but I have a feeling that the translation requires one more light edit to present it at its best.  It didn’t detract too much from the pleasure of my reading, but some paragraphs were a little wordy and slightly tangled when simpler language or use of a pronoun might just have streamlined things.
There's also a fair amount of one of my least favourite styles in the writing of speech, that of the ... to represent pauses or hesitancy.  It's a small thing that possibly reflects natural conversation, but natural conversation and good written dialogue often bear little relation.  Those three dots might have a place, but when they're overused they do irritate me.
Translation and dots aside, this is a tremendous read.  The characters and plot are fully formed and each time I put the book down I started looking forward to the next instalment.
I'll definitely be getting to know Erlendur better in the future and I'm certainly recommending this to any fans of the police-procedural who enjoy a touch of class.
Posted by Nigel Bird at 09:35