You may have seen ‘One Too Many Blows To The Head’ listed as one of my Top 5 novels of the year.  Set in the boxing world, it’s a book that really does pack a punch.


That was co-written with JB Kohl, so I was curious as to how Mr Beetner would fare as a lone wolf. 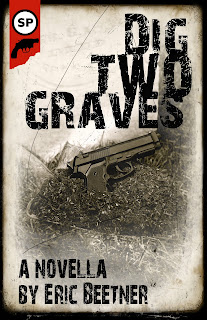 In my opinion, he managed extremely well.


Dig Two Graves is essentially a story about revenge.


Val has come out of prison a confused man.  It’s about the same way he went in.


Inside, he discovered the joys of Ernesto’s mouth as an antidote to sexual tension.  Thing is, he has feelings for the man, not that he’s prepared to admit them.  It means that he gets stuck somewhere between his wife and his male lover.


It’s a situation he’d most likely have stuck with until his arrest for a bank robbery.


Because he’s become such a careful planner  (‘Planning.  A good bank hit takes planning and, even more than that, humility.  All the big names – Jesse James, Bonnie and Clyde, Dillinger – they all had the same M.O.: go in big, scare the shit out of them, take as much as you can carry.  What else did they all have in common?  Died in a hail of bullets.’) that he knows there’s only one way he could have been pinned for the job – his partner in crime (Ernesto) has ratted him out.


Val is taken in handcuffs across town by a silent cop.  When they arrive, Val and they’re met by Val’s wife who’s waving a gun.  She’s not too happy to have heard about her husband’s extra-marital activities and takes a shot at them.  Blows a hole in the cop.  Takes another shot and misses them both.


Thankfully, she calms down at that point and decides to help Val to escape.  Maybe she shouldn’t have bothered.


From here on in, this becomes a quest for revenge.   Val’s targets are Ernesto and the big cheese in the local crime fraternity who happens to have it in for Val for having an affair with his wife many years earlier.


We follow Val through church meetings, gay bars and slums as he keeps his nose to the ground in his quest for blood.


There are a number of times when his rational self considers leaving town and finding safety.  At least that way he’d get to stay free.


Instead, his hot-headed-self wins out (‘Everything from here on in counted as borrowed time anyway.  Might as well make it count’).


Truth is Val is happiest when the adrenaline is pumping and he’s in the thick of violent or dangerous situations.  As we get to know about him, we realise his past hasn’t been so much chequered as all black squares.


The plot moves with energy and tension from one scene to the next and the excitement Mr Beetner stirred in me was palpable.


His characters are written beautifully from Val’s perspective and the settings had everything I need.


Best of all, though, is the voice of the book.  It has the hard-boiled edge of another age.  The sarcasm is heavy, the wit sharp as shark teeth and the humour laugh-out-loud.


One of the effects Mr Beetner’s style has is to throw my sense of time and place.  That may seem like an uncomfortable place for a reader to occupy, but I love the way it happens.  I found myself transported to a world of the black and white noir movie, all mist, darkness, caricatures, hats and long coats until I’d be shaken from the moment by a Tweet, the mention of a song or a tongue-piercing.  It’s something I fully enjoyed, a juxtaposition of two eras that works extremely well and with great originality.  Takes me back to when certain things just didn’t happen even within my lifetime.  How things change.


One thing that hasn’t changed is my respect for Eric Beetner as a writer.  Next on my card is the sequel to ‘One Too Many Blows…’ – ‘Borrowed Trouble’.  I know already, I’m really going to dig it.
Posted by Nigel Bird at 10:13