One Man's Opinion: THE DEVIL ALL THE TIME by DONALD RAY POLLOCK 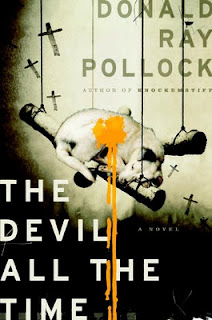 The Devil All The Time is among the most profound books I’ve ever read.


It has a place among the American classics in terms of the scope of the book and the quality of the voice.  There are echoes of great writers of the past, something that is magnified to some extent by setting the story in the decades following the Second World War.


Having read and admired his short story collection ‘Knockemstiff’, I’d been itching to see this on the UK shelves.


It’s been a long time coming; the reasons for that are clear to see. The prose is lean and crafted so well that I imagine every single sentence has been given attention in the editing process.  The characters, even those whose appearances are brief, are terrifically drawn and capture all five of the senses.  The surroundings are vivid without being overstated. The plot begins like loose fibres which are twisted and bound together to form a rope of the highest quality.


The story strips the human race to the bone.  Exposes it for what it is - animals with the capacity to think and use language.  We meet obsessions relating to basic drive and self-preservation - sex, mortality, religion and murder.


It reveals what happens behind closed doors, the private moments that so many are keen to keep hidden.


One of the key images in the book is that of Miller Jones.  He’s not seen for long.  Alvin Russell, who found him while serving in the South Pacific, stumbled into him on a patrol.  Jones had been skinned alive and fixed to a cross, was covered in flies and his heart was still beating visibly inside his chest.  Alvin Russell does the best he can.  Shoots Jones in the skull.  Hangs around for a while and exacts revenge on those who did the skinning.


It’s kind of Old Testament.  Hints at one of the book’s themes, the interpretation of religion to satisfy personal ends, yet also of the hope that lives within us all.  That beating heart is like the flickering of a candle flame.  Demonstrates just what we’ll try and survive in order to keep going.


There is darkness within the pages, no doubt about it.  Hardly a stone of depravity is left unturned.  All the same, the scenes are handled perfectly.  None of the situations or actions are shied away from, though none of them are revelled in either.  It might have been an easy way out to tangle us up in description and detail, yet he draws enough of a sketch for us to see the picture and leaves the colouring in to our own imaginations.  These scenes are not graphic or cold, but they hold all the more power for that.


I’ve seen Mr Pollock compared to practically all of the [male] giants of American literature of the Twentieth Century.  I can’t add to the list without stepping out of my depth, though I’d be tempted to throw in some European influences also if I were to do so.  He clearly belongs to a very special group of authors indeed – those who can tell a story that isn’t going to be forgotten any time soon, those whose books will survive more than one generation and those with the ability to reach right into a reader’s mind and scratch words onto the inside of the skull lest they might try and forget – and the sooner he’s hailed as such in literary circles, the better.