One Man's Opinion: THE COLD KISS by JOHN RECTOR 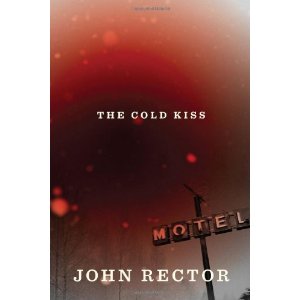 Just before I tell you what I think about 'The Cold Kiss', I'd like to point out a couple of things.
First, the price of Smoke (my critically acclaimed novella) has just been dropped as a ten day experiment.  You can buy it now in the UK for 86p and in the US for $1.39 including taxes.  It's a good read and value at such prices.
And if that doesn't appeal, perhaps a free book from Blasted Heath will make more sense.  Today you can get hold of Phase Four by Gary Carson:
'When a classified military convoy transporting nerve gas is hijacked by terrorists in the Nevada desert, Homeland Security investigator Matthew Drake is assigned to put one of the suspects under surveillance. But when the gas is released inside a high-rise luxury hotel in an apparent attempt to assassinate the President, Drake realizes – too late – that the hijackers weren’t terrorists, the convoy wasn’t carrying nerve gas and that the intended target is reality itself.'
And now to one man's opinion.
There’s plenty to like about The Cold Kiss. As one of the characters remarks, there’s something of an old-fashioned whodunit feel to things when a group of strangers become stranded in a motel and things start to go wrong.
Nate and his girlfriend Sara are heading to Reno to get married. There’s a baby on the way and they’re hoping to make a fresh start. As things unfold, we’ll come to realise that this is certainly a good idea as far as Nate is concerned.
On the way, stopping of for coffee, they encounter a man with a cough who’s rumbling lungs sound very unhealthy. The man goes to the bathroom and Nate, under pressure from Sarah, goes to check that he’s OK.
As expected, he isn’t. He’s coughed up enough blood to paint the toilet bowl, though his physical condition hasn’t improved his manners any.
Just as it looks like the tension between the two guys has passed, they meet again as Nate stops to fill up with fuel.
Sly, the ill guy, has buttered up Sarah by the time Nate returns from paying. He needs a lift and he’s prepared to pay. Nate wants to say no, but the persuasive powers of love and money get him to change his mind and it’s not long before he wishes they hadn’t.
Here's a snippet from just before they decide to let Sly into their car:
'"Kiss me for luck."
I frowned.  "That doesn't work."
"Of course it does," she said.  "It always works.  Now kiss me."
I stared at her for a moment longer, then bent and placed my lips against hers.
It was a good kiss.
But it didn't work.'
And from then on, you just know.
The snow falls hard, Sly falls unconscious on the back seat and our couple have to pull in at a hotel for the night.
As they set to unpack it turns out Sly has died on them. Maybe it had something to do with the bullet wound they found in his side.
Sly also has a huge amount of cash on him.
And that’s when the fun really starts.
The motel is run by an old-man and his religious lunatic of a nephew. There’s a couple on tour and a Russian lady with unusual scars on her arms.
In order to avoid revealing too much of the plot, that seems like a good time to stop.
Suffice it to say that things don’t go well.

Essentially the book has two settings, the motel and the inside of Nate’s head.

We’re taken along by a convincing first-person narrative that is thoroughly engaging.


The drama is heightened at regular intervals as Rector cranks up the gears until things are moving too quickly to end well.
All the way through, the writing is lean and strong.

To my mind, the best part of the work comes at the end.  It's not the adventurous series of nightmare situations that really satisfied me here, (though that would have been enough), but the superb ending as Part 3 talks us through the way the survivors respond to the action.  It would have easy to have left it at the end of the adrenaline bursts, but Rector takes it further and in doing so pulls out a handful of aces.

Recommended.
Posted by Nigel Bird at 18:12