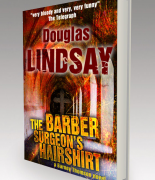 When Nigel opened up his blog to all us Blasted Heathens, he suggested that I write a Top Five of Barney Thomson haircuts. I thought about it for a while, and ultimately decided that a list of murders might be more entertaining. It's not necessarily a top 5; just any old 5…


#5 The Long Midnight of Barney Thomson


Barney kills Wullie with a pair of scissors. It's not brutal, it's not dynamic, it's neither nasty nor psychotic. However, it's the first death in what will become a long line to plague Barney, although few will be so hands on.


Wullie slips and falls towards Barney. Barney tries to catch him, but doesn't have time to get rid of the scissors in his hands. The scissors plunge into Wullie's stomach. There is blood. Wullie dies.


Wullie slumped heavily into Barney and his outstretched hands. Neatly, exactly, with medical precision, the scissors entered through Wullie’s stomach and jagged up under his rib cage. He rested in Barney’s arms for a few seconds, then pulled back to look at him, an expression of stupefied surprise on his face. He lurched back, blood pouring from the wound, the scissors embedded in his stomach.


In truth, it's pretty damn unrealistic. If I had the book over again, I'd have Barney accidentally kill Wullie in a completely different way. When I wrote the film script there was an equally unrealistic death involving a mouse and a toaster. Shame that never got made…


#4 A Prayer For Barney Thomson


I had this idea to have my serial killer peel the skin from someone's leg and then strangle them with the skin. I asked a paramedic if this was possible or whether the skin would snap. She said she thought the skin would probably not be strong enough, and suggested that instead the killer could ram the skin down the victim's throat. I went with that, although I didn't actually describe the murder, just the aftermath.


Detective Sergeant Ferguson approached. Looking sombre for once, but only because he hadn’t eaten anything in ten hours. They were aware of his approach; only Mulholland bothered to take it in.


Mulholland raised an eyebrow. ‘You mean she’s not dead?’


‘Better than that. Her parents are dead, so you don’t have to tell the mother.’


#3 The Haunting of Barney Thomson

The killer in this book takes care of most of his victims by decapitating them with an axe. Some of the deaths are described – scenes which I must confess to writing without doing any significant research – while some we just learn through the aftermath. My favourite is the one where old man Koppen is murdered; his body is left sitting on the sofa, his decapitated head placed on top of the television, after which blood runs down the screen and congeals, while hard core pornography plays on a continuous loop on the TV. I'm not sure how hard core pornography – or indeed drama of any kind – would play on a continuous loop on one's TV set, but let's not let that stand in the way of an absurdly grotesque scene.


Semester removed his rubber gloves with a satisfying smack, placed them in the makeshift forensic bin, closed his bag, and wandered over to stand beside Frankenstein, who had watched over him for the previous forty minutes. The two men stared at each other, Semester shrugged.


Frankenstein laughed. Semester turned and looked over the crime scene.


‘Too early to say the cause of death.’


‘Thanks. Died a while ago. At least fourteen hours, maybe twenty. I’ll let you know. Either way, it’s probably too late to stick the head back on. I mean, they can do amazing things these days, but this…’


#2 The King Was In His Counting House


I think I just like this one because when you're standing at a urinal, minding your own business, assuming you're alone in a toilet and taking a pee, you're really not expecting someone to drop out of the ceiling and knife you in the head.


Trudger stood at the urinal. Had the toilet to himself, which you might think was fortuitous for his killer, but actually it was fortuitous for the others who’d decided not to use the toilet at that time, as his killer would’ve taken out any sundry volunteers to the slaughter. Trudger took his pish, let’s not go into too much detail here. Gave the whole thing a shake, was about to tuck everything back inside his big purple pants, when the Ride of the Valkyries descended from on high. Having suspended herself between cobwebbed pipes and the corners of the ceiling, she released her hold, transferred the knife from her teeth to her hand, and buried it to the hilt into the top of Trudger’s head, as she free fell on top of him.


This one scores a big fat zero on the possibility of actually happening scale. Man and woman sitting at dinner, he's flirting like mad, she's tolerating him. Finally she leads him to believe that he's going to get somewhere and he leans across to grab her head and kiss her. She takes it for a moment, then bites him. He pulls back smiling, and…


She lifted her empty wine glass and held it up to show him, as if offering it for a toast. He looked at her quizzically, assuming she had some weird sexual thing in mind. But when she moved it was with speed and grace, an almost balletic quality to the motion.


She brought the wine glass down on the edge of the table, so that the cup snapped off with a loud crack at the top of the stem and spiralled into the air, then in the same flowing movement she brought the stem up and plunged it into his right eye, through the ball and deep into the socket, forcing it in the full six inches, so that the base of the glass rested up against his face.


The initial spurt of blood was arrested by the bottom of the glass, so that as Fitzgerald pitched forward, his head thudding noisily on the table, the blood squirmed uneasily from underneath the glass and began to spread across the white table cloth, which had up until now only been despoiled by a smidge of blette. 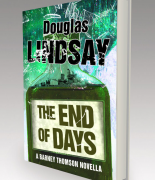 Then she caught the cup on its downward spiral.
Really, you're going to have a hell of a job snapping that stem off without smashing the glass, but why let that get in the way of a murder that feels beautifully cinematic in its execution.
[here's hoping, Doug]

And by the way, they're at it again over at Blasted Heath.  Today they're giving away other people's stuff and it's Nik Corpon (superb, really).  What the hell are you waiting for - get over!

There are, of course, plenty more deaths and murders in the series, these were just five to come to mind. Perhaps one day there will be a 5 More Deaths In Barney Thomson Novels.
Posted by Nigel Bird at 13:16