Keith Gilman is a writer and a cop. Here's the rest of the story. 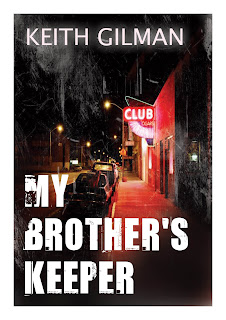 1. Tell me what I need to know. And I don't want to hear your life story.


MY BROTHER'S KEEPER is a detective novel set in Philadelphia, about a down-and-out, ex-Philly cop trying to put to rest the ghosts that still haunt him from his days on the street. A woman from his past returns. His old partner is killed. There's a psycho-sexual murderer loose on the streets of Philadelphia. Death is everywhere and he's learned to live with it, until it ends up on his doorstep.


2. You really a cop? Anything else I need to know?


I've been a police officer in the Philadelphia area for close to twenty years and my writing reflects that experience on many levels. I believe that cops have important stories to tell, stories that need to be told and deserve a strong voice. My Brother's Keeper is the second book in my detective series. The publisher is Severn House. My debut novel, Father's Day, won the Private Eye Writers of America Best First Novel Award and is now available in paperback. I also have had numerous short stories published in a variety of crime fiction magazines both on the web and in print. Most recently, my story Devil's Pocket, featured in the anthology Philadelphia Noir from Akashic Books, was nominated for a Macavity Award


Readers want to know what cops know. And what cops know best is Death. They've grown accustomed to its face. They've come to recognize it in all its forms. They know it for what it is, without the glamour or the superstition. They can often see it coming. They've seen its aftermath. They've boiled it down to its most common denominators. It is the thing they are most qualified to talk about and write about.


There's a story I heard once, of a rookie cop still in the police academy, who asks a question of one of his instructors, a grizzled, old, veteran homicide detective. He wants to know how to be sure someone is dead, how to recognize it. He already knows the physical characteristics. If there's no breathing and no pulse, the person is technically dead. But is there something else he should be looking for?


The grizzled cop says only this, "Dead is dead, son. You'll know it when you see it." It didn't really answer his question but it was an answer that said something about the grizzled old cop, about where he's coming from. In My Brother's Keeper, we get to view the world through the eyes of that cop, who's seen it all and done it all. He walks the walk and he talks the talk and he pulls back the curtain on the dark stage of humanity and its crimes.


4. What can I get from you that I can't get in the morning paper?


My writing style is consistently atmospheric, gritty, lyrical and haunting. The narrative contains stark imagery, strong noir elements, multiple layers of meaning and psychological depth. The setting of My Brother's Keeper is the urban landscape of Philadelphia, and there we delve not just into the soul of a city, but into the soul of a man.


Crime fiction can be more than gun fights, car chases and raunchy sex. It can address the most fundamental questions men have always asked themselves. It can show men in the throes of moral dilemma, making life and death decisions. It's more than a story well-told. It's a story with vision and insight and characters that come to life. Pure realism is relatively easy to replicate. But poetic realism needs to be molded as a lump of clay into a sculpture, it needs to be drawn as a painting might. It is not only a mirror held up to the world. And though it is our eyes that gaze into that mirror, the reflection is different for each of us. And that's the wonder of literature--it relates both individually and universally. It is both a singular vision and collective one.


I'd like to think that in My Brother's Keeper you'll find vision and depth and poetry, as well as a harsh realism and moments of extreme violence that remind the reader that this is a story of pain and death as well as redemption.


I'll leave you with a few lines from the book. At the end of Chapter sixteen, our hero Lou Klein is talking with Brian Haggerty's mother. Haggerty inherited a popular nightclub in Philadelphia from his gangster father. He's a suspect in the murder of Lou's old friend and partner at the Philadelphia Police Department. The end of the conversation gives us a glimpse of Lou's character.


“You don’t seem to have a very high opinion of me, Mrs. Haggerty.”
“I have no opinion. You remind me of someone, though. Your nose isn’t small but it’s straight. Your parents must have been an attractive couple.”
“My parents are dead.”
“Both of them?”
“My mother was murdered in her house in Overbrook Park. She’d been there a week before they found her.”
“For heaven’s sake. How often did you check on her?”
“Not often enough, apparently. Not as often as your son checks on you, I’m sure. He probably checks your pulse at night while you’re sleeping.”
“I suppose you think I deserve that. Maybe I do. And your father, he was a cop, like you.”
“No, nothing like me. But yes, he was a cop and he was killed in the line of duty a long time ago.”
“I’m so sorry.”
“Don’t be. The badge meant everything to him. He died doing what he loved.”
“And how about you?”
“If I cared that much, I might still be wearing it.”
“Oh, that’s right. You’re a private investigator. Why aren’t you still on the force? Or is that the one thing you don’t want to talk about?”
“Let’s just say there’s no love lost between me and the Philadelphia Police Department.”
Lou opened the door and stepped out onto the front porch. The breeze whistled through the trees and he waited for it to pass and then went to the pack of cigarettes in his pocket. Eleanor Haggerty leaned into the doorway.
“You don’t like me very much, I’m afraid. Don’t bother to answer. I know what you’ll say. You’ll be polite and smile and tell me it’s not like that at all. You’ll say that it’s not that you don’t like me, it’s that we don’t understand each other. You’d patronize me, wouldn’t you, Mr. Klein?”
“I might.”
“It’s ok. Because I stopped caring what people thought of me a long time ago. They all have their own reasons for hating me and they all believe they’re justified. They think I have money and connections and I can get away with murder. So, it’s ok to hate me. But the truth is, they need someone to hate.”
“Maybe you hate them as much as they hate you. Have you ever thought about that?”
“Maybe you’re right. Then I’m no different than they are. I’m just held to higher standard. As a former cop, you must know how that feels.”
“Good night, Mrs. Haggerty.”
Lou started down the front porch steps.
“Now I know who you remind me of. That statue, in Rome I think it is. The statue of David. That’s it. King David. All strong and serious but with a certain weakness too.”
“I guess I should be flattered.”
“Don’t be. For all his greatness, he had his flaws. An eye for the women. One he couldn’t control. It was his Achilles heel, Mr. Klein.”
www.keithgilman.com
Posted by Nigel Bird at 10:10