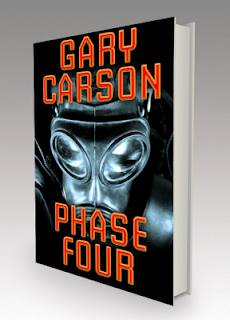 Tell us about your childhood.
I don't remember much about the night I was born. There was a lot of glop and squawling, then I sort of squeezed out and plopped on the table like a damp cauliflower and somebody gave me a slap. Later, I spent a lot of time crawling around, blubbering and eating crayons, and I think I fell off the top of a bunk bed, but it's all kind of foggy. One of my earliest clear memories goes back to grade school. I was standing in the hall with my lunchbox and plastic Stegosaur when some kid walked up to me, leaned down and said "Kid, you've got a head as round as a basketball." And it was true.
What happened after that?
A bunch of idiotic bullshit. When I look back at it now, I have to wonder if I'm really as smart as my hordes of imaginary fans tell me I am.

When did you start writing?
In the third grade. My first story was called "The Tiger Man Strikes Again" and I still have it. The first sentence reads "Once in the deep heart of Africa there lived a tiger who always wanted to go to the city." This brilliant opening is followed by two pages of bloody mayhem.
Do you consider yourself a literary writer?
I write deep literature. Can't you tell? There's no way I would defile my pure artistic spirit by writing mass-market thrillers and selling out for mere cash by shamelessly plugging my fantastically entertaining paranoid-conspiracy technothriller, Phase Four, now on sale (cheap) through Blasted Heath and Amazon.
What are your political views?
I watched the video of Saddam Hussein being executed and it really made me think. It made me think: Is there nothing on the internet I wouldn't masturbate to?

You stole that despicable joke from Frankie Boyle.

What are you working on now?
I just "finished" an apocalyptic disaster thriller called Machine. It's going to need more work, but I'm hoping it will pass muster with the extremely demanding powers that be and maybe come out next year. And I'm currently working on a juicy thriller called "Monster Story." Going back to my roots, I guess.

Thank you for taking the time to talk to us.

What do you mean "us?" You're me. What do you think this is? Fight Club?
Gary Carson is the author of Phase Four, published by Blasted Heath.
Posted by Nigel Bird at 12:36