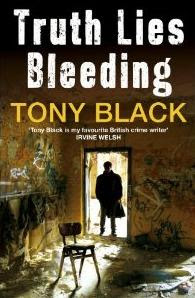 I had an impressive review today over at the excellent Dark Valentine. Heather Faville of Doubleshot Reviews rounds off a well-considered piece by saying:

‘Nigel Bird’s Dirty Old Town is the introduction to an author I will most definitely keep my eyes on. I didn’t just enjoy a few of the nine gems in his collection; I revelled in each and every one of them. There was something, some tiny glimmer in each story that kept me hooked until the very end.’

I also did an interview for Alive With Words and that was posted last night. You can find it at

Another thing happened to me last night. I completed Truth Lies Bleeding.

I don’t get out much these days. Three young children and working too hard tend to get in the way. On Friday night it was a rare treat to get on the glad rags and head into Dunbar for what promised to be an outstanding party – the birthday girl, Pippa, used to work in the music biz, so there was going to be plenty to dance to.

The baby-sitter arrived at 8 o’clock and Isobel wasn’t going to get to the party till half past nine. You’d think I’d have sprinted off to get there early. Instead, I parked myself in a local hotel bar to read an hour’s worth of Tony Black’s Truth Lies Bleeding. If that’s not a testament to how good a book is, I’m not sure what is.

I don’t read too many police-procedurals these days. It’s not that I don’t really like them, more that I’ve read a lot and worry that I’m going to find myself in the land of same-old, same-old. The last one I read was by RJ Ellory, A Simple Act Of Violence, and that set the bar very high indeed.

So I opened Truth Lies Bleeding in hope more than expectation. Not even the ‘Tony Black is my favourite British Crime Writer’ quote from Irving Welsh had pumped up my enthusiasm, nor the fact that I’d read a short by Tony a while ago and found it to be of the highest order.

It opens with the discovery of a girl’s body. Her arms are missing and she’s in a dumpster. No one knows who she is and not many of the locals care. So far, so standard.

In chapter 2, Inspector Rob Brennan walks in. He’s been away for a while, off on psychiatric leave following the death of his brother. Turns out Brennan has few friends – not in the force, not in the community and not even in his family. As soon as he appeared I was fully engaged. Of course, you can’t get into a character immediately, but he was clearly someone I felt comfortable with straight away. The man’s idea of giving up smoking is to change his brand to Silk-Cut, for goodness sake.

From there the plot unravelled, thickened, sped up, intensified and had me hook, line and sinker.

There’s little about the story that I want to give away because I’d like to recommend that you find it out for yourself.

Brennan turns out to be a terrific character who has enough individuality to stand head and shoulders from the masses within police fiction. He seems to be haunted by the past, the present and the future all at the same time. The past has him by the short an curlies, the present (the case) certainly isn’t revealing itself to him in the way he might like and the future, well that could be anything, but most likely will have him directing traffic and being thrown of his home by his wife.

Of course, a great cop does not make a book by himself. We have all the tensions between him and his bosses that put his career on shaky ground. We have a group of colleagues who can’t stand the sight of him. There is the action of the case itself and then there’s the seedy, dark world of the criminals he’s after. I think that it’s the painting of the bad-guys that got Mr Irvine Welsh excited, and rightly so.

Black doesn’t mess about. There are no fluffy edges to the lives of the junky couple we get to know. Their dealer, Deil (the devil), has no redeeming features whatsoever – he’s all bad and then some. Gunter is a shadowy figure from one of Europe’s paedophile rings who is cool and efficient and full of sleaze. Edinburgh itself is painted in browns and greys with a touch of the scent of deisel fumes and there’s an unhinged psychotherapist to whom Brennan has become too close.

The case is complicated, a series of broad strokes within which Brennan struggles to see the detail. He turns to his old mentor, Wullie, for advice and he begins to see the way he needs to think.

Brennan is a complex man. What impressed me most were his levels of self-control when on the job. No matter how his life spins out of control he manages to apply super-human discipline to keeping things straight at work. He also has an excellent perspective on what he does. He’s one of those real cops that couldn’t do anything else.

‘There’s no winning in the force, only degrees of losing,” is the way he views things. Even a positive result must have been gained from someone’s pain; it’s just the way it is.