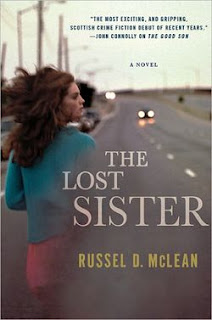 Dancing With Myself Russel D McLean

A: But there’s only one seat.

Q: You don’t get it yet? You’re interviewing yourself.

Q: That and wanting to be a writer. I mean, seriously man, what were you thinking?

A: Not fame and fortune, anyway. Basically, I realised I have very few skills and wanted to do an indoor job with no heavy lifting.

Q: How’s that working for you?

A: Well the writing part’s cool. The day job does involved rather a lot of heavy lifting, though, so I’m not exactly living the dream. And, yes, most writers need a second job. Despite the rumours that prevail there are thousands of us not getting paid squillions per book and drinking Champagne from ladies' boots. Quite why you’d want to drink anything from someone’s boot, though, is beyond me. It would taste of sweat. Maybe if you were a foot fetishist, I suppose…

Q: Before you start rambling, let’s talk about your books. Two novels, now. Several short stories. The novels feature a private eye protagonist, as did many of the shorts. Didn’t anyone tell you the PI was dead?

A: Yeah, they did. A lot. But I really can’t be bothered writing a UK police procedural. So many people are doing that much better than I. Besides, with an eye, you have this whole rich mythic vein to tap which is great fun to do in an unusual setting.

A: The massively talented Steven Torres challenged people a few years back to name other Scots Private Investigators. I’m not sure he got many replies. And those that he did were often technically English (For example, Val McDermid’s Scottish but her PI Kate Brannigan’s actually English). So, yes, it’s an unusual setting. And I think that with an eye, you’re able to set your stories at a very “street” level so you can interact with a different cast of characters than in a procedural. Besides the relative uniqueness of the eye in the Scots landscape means the characters will relate very differently than they do to a copper.

Q: You sound like you’ve thought about this. Do you actually have a life?

A: No. Not really. And yes, I have thought about this kind of thing a lot. I’m hugely passionate about the crime genre. Some people might say overly so.

Q: You were nominated for a Shamus last year. Is it true that the winner of the debut category, Brad Parks, planted a bomb under your chair at the awards banquet?

A: Maybe. He claims to have done so but disarmed it when he knew he was going to win. I, on the other hand, did not poison his drink with a slow acting substance that should be kicking in… [checks watch] about now… No, I definitely did not.*

Q: And what about the rumours about you vomiting over bestselling Chicago writer Sean Chercover?

A: Those are true. One hundred per cent. In my defence it was an allergic reaction. Not to Sean, but to the meal I’d eaten before. Thing is though, this story worked its way through the publishing world somehow. I had a UK editor once come up to me and shake my hand, saying he was glad to meet me. I thought he knew me because of my books. Turns out he was just hugely amused about the story of me vomiting over Sean.

Q: Look, we’re running out of time here, so maybe we should mention the new book?

A: New in the US, yes, although its been out in the UK from the terrific Five Leaves Publications for a while, now. March 11, folks, you’ll be able to buy the second J McNee novel, THE LOST SISTER in spankingly wonderful hardback, and I believe even e-book format, from those stunningly beautiful people at Thomas Dunne/St Martin’s Minotaur. While you’re out there, in fact, may I also recommend you pick up a copy of the incredible anthology DAMN NEAR DEAD 2 which was released late last year and features short stories by some of the damned finest writers going. And, bizarrely, me. There we go, plugs done. Can I go now?

Q: You’re free to leave whenever you want, Mr McLean.

A: Oh, that’s nice… except… someone’s strapped me in this chair and… hello? Where are you going? Why are you locking the door? Don’t leave me alone in this room… don’t… [door slams, keys turn in lock.] [Fade to black] *All kidding aside, Brad’s a terrific writer and I’m glad he’s the one took the award. I’m just starting his second novel now, and it looks fantastically good fun.

Sea Minor would like to point out that he picked up a Kindle copy of THE GOOD SON at the ridiculously cheap price of 99p a couple of days ago. Now there's a bargain for you. Thanks Russel. Great job. Buy the man's books and help him avoid heavy lifting.
Posted by Nigel Bird at 07:23