One Man's Opinion: The Damage Done by Hilary Davidson 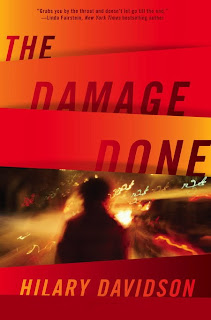 Lily and Claudia Moore had a difficult childhood. It’s scarred each of them for life, but in very different ways. Lily has escaped her problems by moving to Spain, Claudia by losing herself in her drug addiction.
Of course, wherever we go, we take our troubles with us and Lily is no different to the rest of us. She’s introduced when she’s returning from Europe because her sister, the only family she has left, has been found dead in her apartment.
As it turns out, the body isn’t Claudia’s, though the police take some convincing.
What follows is Lily’s attempt to find out what has happened and where her sister could be. It’s a wonderful read, carefully and delicately put together.
The characters in the book are beautifully drawn. There’s Jesse her gay companion, Mr Pete the landlord with the photographic memory, Tariq the dangerous, smouldering Pakistani gentleman, Bruxton the pit-bull cop with the addictive personality, Martin the ex-fiancé millionaire, Ridley the misguided teenager, there are ex-junkies, therapists and dealers. There are also a number of characters in the book who don’t actually appear in person but enter and leave the plot like ghosts.
One of those ghosts is Rita Hayworth, a constant visitor and reference point for Lily and Jesse. She’s an idol to them both, a fantasy they can share a belief in.
It may be no accident, then, that the book has a cinematic feel. When I say cinematic, I don’t mean in a quadraphonic, 3D, hold on to your seats and make sure you’ve got your earplugs kind of way, more the sit back at an old repertory cinema with a cake and hardly any other people there with you variety as an old black and white movie plays out before you.
Hilary Davidson’s debut novel is first rate.
She had me hooked early on and then she reeled me in with a long line and gentle hands in a way that was all skill and compassion.
The plot is as gently layered as a fine choux pastry. It fits together like a rather complicated jigsaw puzzle might but, even so, just when I’d think I’d got the picture there’d be a twist to keep me on my toes.
The depth of the characters is such that it’s impossible not to feel all of the subtleties of their emotions as things happen to them.
I was also impressed by the way the book was wrapped up. The solutions are all consistent with what has gone before and everything makes sense. All in all, the ending is rather gratifying. Hilary Davidson is clearly someone for whom the saying ‘travel broadens the mind’ applies. She incorporates things she’s accumulated in her life and drips them in nicely to add texture to the page. Fashion, culture, architecture, literature, movies, New York, furniture and more besides are there to give us a multi-faceted read.

The Damage Done has a touch of class; in spite of the Rita Hayworth references I can’t help picturing Hilary as more of a Grace Kelly. I hope very much that she wouldn’t be offended by that.