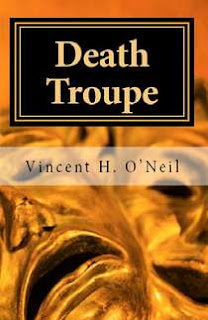 You’ve done a lot of things over the years. You were a paratrooper, a risk manager, an advertiser, a consultant, and even an “apprentice librarian” (whatever that is). Can’t you keep a job?

Oddly enough, writing is the only thing that’s stayed a constant throughout my working life. I wrote my first novel when I was in high school, and kept plugging away at various books for the next twenty years, all the time holding down most of the jobs you mentioned. Although I’ve always referred to my writing as something I did in my spare time, it’s outlasted every full-time job I’ve ever had—which makes me wonder if writing was the full-time job all along.

Your Frank Cole mystery series is set in the Florida panhandle, but you’re a New Englander. How does a guy from Massachusetts write about Florida?

New England winters make writing about Florida an easy, almost mandatory, thing. Honestly, I was introduced to the Florida panhandle many years ago when I was in the army. I was a newly-minted lieutenant from West Point, and was fighting my way through a very tough commando course called Ranger School. In Ranger they don’t let you sleep very much or eat very much for roughly two months, and you carry an enormous rucksack all over the Fort Benning part of central Georgia, the mountainous part of north Georgia, the lunar landscape part of Utah, and then the swampy part of the Florida panhandle. Apparently I didn’t do the swampy part right, because they made me do it over. As a result I spent close to a month partially submerged in a river there, so I can honestly claim that I know the region in a way that few of the locals do.

You mentioned wintertime just now. Your most recent novel, Death Troupe, starts out in the middle of a brutal winter in the Adirondacks. Did you get tired of sunny Florida?

No one ever gets tired of sunny Florida. And I’m certainly not tired of the Frank Cole series, either. With that said, I caught a slight case of the acting bug two years ago and began plotting a new series, one built around a high-end murder mystery theater outfit nicknamed Death Troupe. The great advantage of Death Troupe is that they perform one play a year, each year in a different place, so I’ll have to move them around a lot. The first novel is set in the Adirondack town of Schuyler Mills, and I drew on my long association with winter to write it.

So does that mean Death Troupe is a wintertime read?

You know, that raises a question that occurred to me early in the brainstorming phase of this story: We have plenty of books that are considered beach reads, but is there such a thing as a wintertime book?

I thought I was the one asking the questions.

I am you and you are me and we are we, so I doubt it really matters. But no, Death Troupe isn’t focused on freezing to death in upstate New York (although there’s a much-praised sequence where one of the characters comes close to doing just that) and the last part of the book is set against the backdrop of a spectacular Adirondack spring.

Your main character in Death Troupe is the group’s playwright, Jack Glynn. This isn’t another one of those gloomy stories where the writer is alone most of the time and may or may not be going insane, is it?

Well . . . maybe. Actually, no. Not at all. Death Troupe’s playwright takes up residence in the host town roughly six months before the show, and writes a murder mystery play based on the locale. That requires him to be out and about, meeting the people of the town and learning its quirks. So Jack spends much of his time in the more popular gathering places, from a sports bar to a coffee joint to a frozen lake in the deep woods that’s been turned into a skating rink. And of course he meets just about every resident of Schuyler Mills, from the average everyday people to the . . . how to put this . . . more flamboyant citizens.

Hopefully some of those more flamboyant citizens are females.

Very much so. Jack has been both lucky and unlucky in love, in that he has an on-again, off-again romance with the troupe’s lead actress Allison Green. Their jobs don’t let them spend much time together, and when Jack heads to Schuyler Mills he quickly meets some highly intriguing ladies there. This is tough, as he’s already torn between his feelings for Allison and his fear that the two of them won’t end up together. He enjoys the company of the town’s unpredictable publicity manager very much, and attracts the attentions of a free-spirited ice sculptress as well. Oh, and one of his former girlfriends may just be stalking the troupe, so there’s that.

I didn’t see “Actor” listed among your many failed careers. What qualified you to write about the theater?

Research, research, and more research. When you know nothing about a complex topic like the stage, you have to start from scratch. I got The Complete Idiot’s Guide to Amateur Theatricals from the local library, and it really put me on the right path. The Idiot’s Guides are worth their weight in gold, and I highly recommend The Complete Idiot’s Guide to Private Investigations for anyone thinking about writing mystery novels. After reading many, many beginner-level books about acting and directing, I slowly graduated to more advanced works and finally ended with the memoirs of some noted Broadway directors.

Notice any similarities between directing plays and writing novels?

Actually, I noted a lot of similarity with many different roles, from acting to costuming to set design and directing. In a way, novelists cover all those tasks: We explore our characters’ motivations just like the actors do, dress our characters using techniques from the costume design team, and shape the story in much the same way that directors do. And if it weren’t for the annoying voice asking me questions here, I’d be able to say novelists do all this without having to consider outside opinions.

Pipe down. We’re almost done. It sounds like your theater research helped your writing. Did it?

Unquestionably. I really did a disservice to actors, designers, and directors in my last answer, as one individual can’t even come close to doing all those jobs. But by reading about them and taking copious notes, I was able to pull bits and pieces of the things they do into Death Troupe. For example, I learned that some actors will create a biography of their character to help them understand the role better, even though none of that bio ever gets into the play. That helped me form the backgrounds of some of my own characters, and it reminded me that we writers don’t have to include every detail that we might have worked out in our heads. Sometimes it’s better to leave a few loose ends untied.

Absolutely. It’s very much a piece of stage wisdom to always leave the audience wanting more. So having said that, shut up and stop asking me questions.

To read Vinny’s blog on life, writing, and everything else, please go to

For his website, which is jam-packed with sample chapters and a review from The Sunday New York Times that he had tattooed on his back, please go to

http://www.vincenthoneil.com/
Posted by Nigel Bird at 09:30