Viv Albertine With Ian Rankin: Words and Music Memoirs of a Punk Rocker 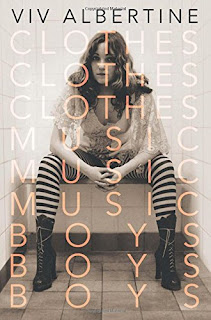 The Edinburgh International Book Festival always comes at the wrong time of year for me as it starts as the schools go back and I have to put on my teacher’s hat again.

I still make a point of making sure I get the programme early so that I can choose one outstanding event. In recent years I’ve been privileged to see Willy Vlautin, Katie Kitamura and Megan Abbott for example, so you can see I pick rather well and have impeccable taste.

This year, Ian Rankin has had the honour of being a guest selector and he’s chosen a cracking bunch of people to talk to. When I saw he’d chosen Viv Albertine among those names, I was on the phone buying my tickets. Having been to the event on Sunday evening with a very good friend of mine, I can tell you I wasn’t at all disappointed by my choice.

Ian Rankin does a brilliant job in conversation. I’ve seen him a few times in this role and have been really impressed by his manner. Unlike many in the facilitator role he clearly feels he has nothing to prove. He knows his subject material and he applies insightful and open questions at the right moment to keep things flowing. He gives his guests the opportunity to talk and elaborate without constant interruption and that’s a big bonus in my eyes. It’s a big skill that he has and is one that is too often under-rated in my eyes.

Given this was a music event this was also right up Mr Rankin’s street. Not only does he know his history, he’s lived it. Great, then, to hear some of his own anecdotes thrown into the mix in a very light-handed way and adding colour to the evening.

The first thing I’m going to mention is the very last thing that I expect I’m supposed to say, namely that she was utterly stunning. Not just the way she looked, but the impact she had when walking on. Her book is entitled Clothes, Clothes, Clothes. Music, Music, Music. Boys, Boys, Boys (US). It’s also called Clothes, Music, Boys if you want the Tesco-friendly cover.
She began with a reading from the book. It was an engaging and funny account of her first gig with The Slits on the Clash’s White Riot tour, chosen especially as it took place in Edinburgh. What images came forth in that burst of words. It screamed punk rock and energy and possibility.

The thing is Viv Albertine was in an all-girl band at a time when that just didn’t happen. She and her tribe were so wild-looking that there had to be negotiations with the hotel to make them honour their booking and then only on the condition that the girls didn’t leave their rooms and stayed out of sight. Don Letts had to call ahead to all the rest of the hotels booked to make sure that they knew exactly who and what was heading their way.

Viv was around at the time of an explosion. She had little stories about Mick Jones, Sid Vicious, Johnny Rotten, Malcolm McLaren, Johnny Thunders and Vivienne Westwood that made my hair curl (check out my picture – that’s some feat). These people carry the status of being legends, so it was great to hear her talk about them in such a natural way. Best of all, they didn’t become her story. She wasn’t great to listen to because of who she knew but because she has a hugely creative spirit and happens to have known a lot of amazing folk along the way. 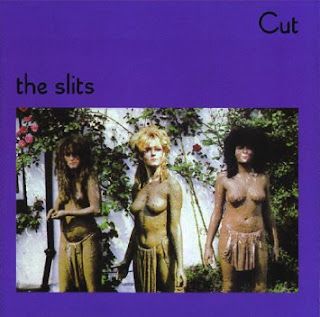 There was some talk about the famous album cover and a rather lovely quip – ‘It was saying to the boys, come and have a go if you think you’re hard enough’- fantastic.

A lot of the focus was upon the roles and expectations of women back in the mid-seventies and since then. It’s incredible to reflect upon that and to see how many things have changed. To my mind, it’s important to revisit and remember such times and there’s unlikely to be a more rewarding way of doing so than by taking a read of her book. It’s not that I agreed with all of the statements made about then or now, but I admired the sense of personal perspective that was offered and it gave me a lot to think about.

Side Two of the conversation moved on to explore the world post-Slits. It’s been an interesting journey.

There was another reading. It started about sex and ended up with cancer. As she finished, instead of the usual applause there was silence. It spoke volumes about the power and the frankness of her description.

We touched upon aerobics teaching and film-making and then moved on to a mention of her picking up her guitar again as she turned fifty. She knew she didn’t intend to take it up seriously, but she did know that if she played she knew something would happen. A creative energy within her would be unlocked and she would set off on another journey of making and shaking. More writing was mentioned. A book. A novel perhaps. Hopefully all will soon be revealed.

That unlocking of energy is something I understand. There are many catalysts out there and I reckon it’s our responsibility to go out, find and experience them. What an important reminder of something fundamental to life and the creative process that stems from living it. That alone was worth the price of entry.

After the event my friend and I went to the signing tent for a while. I had nothing to sign and didn’t fancy queuing. What I did want was to keep the evening with me for a little longer.

I never did see The Slits play live, but at least on this occasion I can say I was there.