One Man's Opinion: THE GIRL WHO PLAYED WITH FIRE by STIEG LARSSON 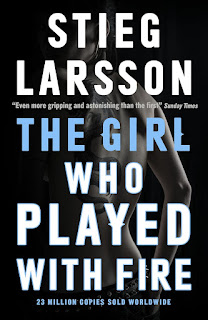 Several years on from reading The Girl With The Dragon Tattoo I found The Girl Who Played With Fire (US) on the shelves of the home we rented for our holiday.

If memory serves, that first book really bamboozled me. I couldn’t believe that a novel told with such frequent (and long) tangents and huge slices of back-story and explanation could have been as entertaining as it was.

In many ways, I feel the same about the sequel. Blomkvist and Salander are now estranged. Salander has cut off all contact with him and escaped to travel the world.

Much of the opening section focuses upon her time in Grenada. She’s hooked on mathematics problems and is curious about a strange couple who are staying in her hotel. It’s an engaging start, but doesn’t really have anything to do with the rest of the book.

Things solidify when she returns to Sweden and hooks up with ex-girlfriend Miriam Wu.

Millennium has taken on a new project courtesy of a free-lance journalist. His article and book are going to blow the lid off the sex-trade and will uncover the exploitation of prostitutes by many of the pillars of polite society.

The prospect of the revelations stirs a hornets’ nest (something tells me this might also happen in the third book) and a lot of mess hits a lot of fans.

Salander finds herself as the main suspect in a terrible crime and the only people who want to protect her are ex-employer Armanski, a retired boxer and Blomkvist.

In spite of the repetitive reflection and those huge chunks of unnecessary material, it’s nail-biting stuff. I reckon it works so well because it’s important to me that Blomkvist and Salander remain safe no matter what. It’s impossible not to root for them, even when belief in their abilities and personalities is stretched a very long way.

Unlike with the first book, I was a little dissatisfied with the ending. Whereas book one felt self-contained, this one seemed totally aimed at luring the reading to book three. That hook may well work for me, too, but might just take me several years to get around to completing the trilogy. Who knows? I might even get to read The Girl In The Spider’s Web before I retire, but it’s very unlikely that I’ll buy myself a copy – it will be a matter of staying in the right place on my hols.