One Man's Opinion: GUNS OF BRIXTON by PAUL D BRAZILL 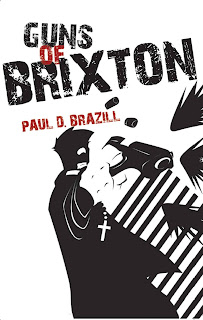 “He suddenly braked in front of a camping supplies shop advertising its January sale with the slogan NOW IS THE WINTER OF OUR DISCOUNT TENTS.”

Guns Of Brixton (US) fizzes along from the start when the gangster Half-Pint Harry has his brains blown out in a London lock-up. Of course, this isn’t good for Harry and it leaves his killer in a difficult position, especially given the Half-Pint’s importance. What follows is a genuine caper where an assorted bunch of characters go about their New Year celebrations in a variety of rather interesting ways.
Take Kenny and Big Jim as an example. They’re dressing up as women and heading off to rob a big jewellery shop. The assistant greets them as they enter:

“Morning ladies,” he beamed. Then he saw the Glock and his jaw dropped so much that you could have scraped the carpet fluff from his bottom lip.

This situation encapsulates a lot about the story. We have the cross-dressing thugs, the threat of violence and the hard-boiled humour that runs through the piece like words through a stick of rock.

To me, Brazill unashamedly brings together a broad range of cultural strands that I was bombarded with through the seventies and eighties. The style reflects so many aspects of my TV viewing – the Carry On jokes, Galton and Simpson, the caricatures of the villain and the common, the pub and the cafe, Michael Caine and The Sweeney, the slang and the banter and the pantomime.  These elements come together into the melting pot and form a delicious stew of criminal adventure. None of the style and mood would be of value if it weren’t for the author’s ability to craft a strong story where the adventure and action always hold the attention, the observations are sharp and the characters create small nuclear explosions as they collide with each other.

Guns Of Brixton has a very British flavour to it. I imagine that as it travels across the Atlantic it might make a few waves along the way but for those of you in the US who relish a good tale, this is a book that should be bought and wrestled with.
Posted by Nigel Bird at 12:35