One Man's Opinion: THE DEAD OF JERICHO by COLIN DEXTER 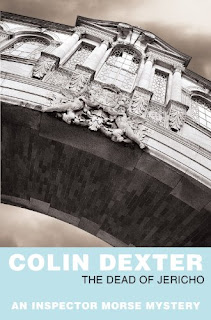 It’s slightly odd reading a book about characters who are so known in their television incarnations. I found it hard to separate the Morse and Lewis of the page from their counterparts on the screen. I did, eventually, become engrossed enough in the plot that I barely noticed the issue.

The Dead of Jericho (US) has a somewhat implausible opening. Morse happens to chase up and old acquaintance on the day she is found hanged in her kitchen. When the case is finally presented to him, he’s already been dabbling to try and find out what happened. From that point on, this became a solid police procedural.

Morse and Lewis form a great partnership and play off each other’s strengths and weaknesses until the case is solved.

Another death thickens the plot and the ring of suspects are used nicely so that each of them remains as a spinning plate in the process until the last possible moment.

Parallels to a Greek tragedy are played out and just at the point where this becomes a too silly the plot veers off in another direction.

Dexter doesn’t hammer home the final nail in the coffin until the last pages where everything is wrapped up neatly with all the skill of a master craftsman.

I enjoyed the read more than I expected. Some of the references and quotes were way over my head and did impede the flow at times.   Even so, I would happily read another in the series, especially as holiday entertainment. I will, however, look forward to further TV episodes of Lewis and Endeavour with some enthusiasm.
Posted by Nigel Bird at 14:15