One Man's Opinion: THE MURDER BAG by TONY PARSONS 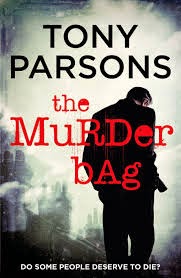 Having seen interviews with Tony Parsons when The Murder Bag (US) was released, as well as a rather good TV piece on boxing in fiction, I couldn’t resist buying the book. Having just piled through it in a couple of page-turning days, I’m very glad I did, even though I have a few reservations.

Max Wolfe is the protagonist. He’s aptly named given that he’s part of a pack as well as acting as a loner much of the time. It’s clear from the off that Max has a strong belief in his convictions and he’ll go against orders when he believes himself to be right.

He’s investigating a series of murders among a group of men who formed tight bonds during their private school days and who have gone on to have varied degrees of success in their adulthood. The killings involve the slashing of throats with a weapon specifically designed to do the job and the perpetrator leaves no clues at the scenes.

When the press get involved, a website by Bob The Butcher and its hashtags goes viral and an MP becomes one of the potential victims, the pressure on the police mounts.

There are many things to like about Murder Bag. The directions the case takes constantly fuel the plot and it’s difficult to stop at the end of one chapter when the path into the next has been so neatly built. Wolfe himself is an engaging sort and the other central players are all nicely formed. The domestic situation, though a little clichéd, provides a decent contrast to the drama and the head-scratching.  Wolfe’s thought processes work well and at a number of satisfying levels. There’s also a high pitch of tension when the action takes place and there are some neat little boxing insights that add another dimension. I also really enjoyed some of the turns of phrase; Parsons throws in some sentences of real power and craft along the way and manages to ensure that they don’t feel out of place. London is also really beautifully drawn and had me wanting to go again in the near future – I think visitors to the city hoping to find a read that will add to their overall experience could do a lot worse in choosing their material that this one. I also really enjoyed the final twist – it was a blow that I’d been expecting for so long that I’d forgotten about it and was totally taken aback when it was finally landed.

On the downside, I had a few niggles.

There are passages where the repetition of a word becomes jarring. It may be a deliberate act of style, but I’d have hoped an editor might have suggested a touch of ironing where this is the case.

There’s also an aspect relating to the way the research is handled. Mr Parsons has clearly done his homework and may also have access to things that many others might not. Managing to inserting information to add credibility to a book is a tricky thing and I think a little more subtly would have helped here. It feels, at times, that each character has an encyclopedic knowledge of the world and I’d be looking for better ways of getting a point across in (and hopefully there will be one) book two.

This seeming desire to get everything right also throws up another issue. In trying that hard, it somehow highlights the points where there are contradictions or improbable procedures. I’m not going to draw your attention to them as that may not help your enjoyment of the story when the time comes.

Overall, I think that if you’re a fan of the police procedural this is definitely one for you. It has most of the things you’ll want and a little more besides. I enjoyed it very much and am definitely going back for more should Max Wolfe make his reappearance.

A winning crime debut.
Posted by Nigel Bird at 12:39