One Man's Opinion: THE LOST AND THE BLIND by DECLAN BURKE 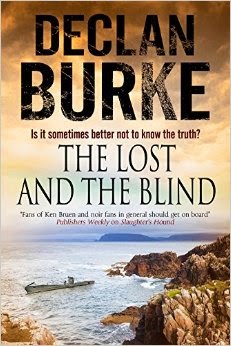 Tom Noone is an author, journalist and a ghost writer who is approached to write a biography of one Sebastian Devereaux. Devereaux spent his life as an archaeologist and a novelist on the island of Delphi on Lough Swilly in northern Donegal. The man providing the funds for this task is the super rich octogenarian Shay Govern, long-established as a name among the Boston Irish. His motive appears to be one of cleansing; he wants to reveal a hidden atrocity committed by the Nazis back in 1940 where a number of children were slain. Govern also wants to support the island by regenerating the economy and setting up a gold mining business.

Govern has also employed a private investigator, Jack Byrne, to locate an eye-witness to the atrocity, one Gerard Smyth. He’s an old man who also seems to want to get something off his chest. It turns out that Byrne has already found Smyth and has decided to keep that information from his employer in case he can find an angle to exploit. All he needs is a little help from Noone and they’ll be laughing.

As the stories unfold, the ghost-writing project becomes much more complex than it seemed. It’s unclear who is being totally frank and what dark mysteries rest underneath the surface.

When a murder is committed, the plot thickens considerably and the arrival of a tough and unorthodox cop makes Noone’s life extremely uncomfortable. It’s not long before she forces Noone’s hand and he does a runner with his estranged young daughter. Noone suddenly finds his company in hot demand from a number of unsavoury and rather intimidating characters. There are many out there who want to avoid the truth about what happened on Delphi in the war from being revealed and they will stop at nothing to prevent it from entering the public arena.

The plot is rather complex. It grips tight at the beginning and leaves plenty of open-ended questions and contradictions to create a strong energy and intrigue.

Noone is a noble investigator. He can’t help but throw himself fully into the work and he’s such a likeable narrator that the prospect of harm coming his way causes genuine concern and tension.

Each of the characters in the novel is really well drawn and they’re a pleasure to meet, whether they’re bit players or have major roles. It can, at times, seem as though their motivations seem slightly overblown, but as the work rushes to its denouement all becomes clear and the pieces fall nicely into place.

I enjoyed this one, not least because of its smooth evocative prose. Contrasting with that, the snappy and clinical action scenes are also a pleasure to read - Burke would make a great undertaker as he can hammer the final nail into a coffin with brutal precision and dexterity.

The Lost And The Blind (US) is definitely one to add to your to-be-read pile.
Posted by Nigel Bird at 13:28