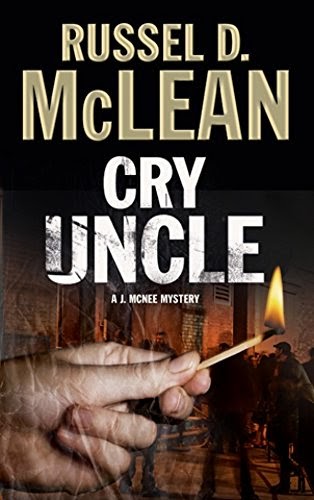 David Burns is a hard man of the old-fashioned variety. He believes there’s honour among thieves and has been the ruthless leader of Dundee’s underworld for many years.

In steps Craig Nairn, the new contender for the Burns’s crown. Nairn is growing arms and legs and when his tentacles reach into Burns’s turf, tensions soon grow out of hand.

Sandwiched in between them is private investigator McNee who is working as one of Burns’s henchmen while undercover for the police.

Cry Uncle is a story that is full of drama, action and tension. It’s a book that had me craving slots of spare time so that I could continue reading and I made sure that I carved out those slots wherever I could. The chapters are perfectly bite-sized to suit these purposes, satisfying the appetite for the book and keeping the pace and momentum high, yet never quite fully sate the appetite until the final pieces are put into place.

McNee is a terrific first-person narrator. His voice is compelling and he’s articulate enough to take us through the ins and outs of the plot with ease. We follow him through a series of events in which he is always weighing up his moral position and, more often than not, considering how he can survive in a world where his friends and enemies all seem to find him expendable. He offers glimpses into Dundee past and present that paint a very vivid picture. He also takes us through the landscape of his internal workings, which is like taking a walk along cliffs that are at once beautiful and treacherous. McNee has limits and also has the capacity to cross them; it’s a moral ambiguity that I thoroughly enjoyed.

I loved Cry Uncle (US) and urge you to check it out. It works on so many different levels that I’m sure it has a broad appeal. Those who like a thriller, a PI novel, a police story or a brutal gangland battle should be fully engaged. As a bonus there are great character studies, curve-balls and tender moments. There’s even an ending that has something about the Count Of Monte Cristo to it and that’s saying something.