One Man's Opinion: THE MOTEL LIFE by WILLY VLAUTIN 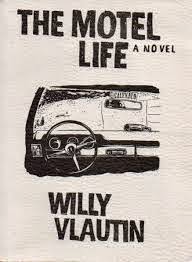 ‘Bad luck, it falls upon people every day. It’s one of the only certain truths. It’s always on deck, it’s always just waiting. The worst thing, the thing that scares me the most is that you never know who or when it’s going to hit. But I knew then, that morning, when I saw the kid’s frozen arms in the back of the car that bad luck had found my brother and me. And us, we took the bad luck and strapped it around our feet like concrete. We did the worst imaginable thing you could do. We ran away. We just got in to his beat-up 1974 Dodge Fury and left.’


Here’s a book I’d like you to try. It’s my third Willy Vlautin novel in a fairly short period of time and it seems I got there and went in the wrong direction, this being his first. It matters not a jot that I haven’t worked in sequence – I’d have read all of three by now no matter where I’d started. The guy has a knack for writing stories that I love and telling them in a way that I find utterly compelling.


In ‘The Motel Life’ we meet up with a couple of brothers. Frank’s first, suffering from a severe hangover when a duck flies through his motel window and then his brother turns up with news that he’s run over a boy in the middle of the night and has his body in the car. Even though there was nothing that Jerry Lee could have done to prevent the accident, he’s riddled with guilt and the guilt only seems to want to grow.


The pair set off on the road hoping to escape the law and to avoid any kind of retribution.


What follows is a remarkable tale. It’s remarkable in the sense that it doesn’t follow any linear storytelling. As they young men move forward the story also moves back to the past to let us know how they came to be here in the first place. This skipping back and forth builds up a wonderful, multi-layered picture that quickly becomes three dimensional rather than flat. Needless to say, these stories are bleak and full of pain, but they’re also full of life and a strong sense of the way the people who inhabit the tales cope with the luck that’s dealt their way.


To add to this, there’s another tier of story-telling. Frank Flannigan happens to make up his own tales. Sometimes he writes them down for his brother to read when he’s passing time, others he just tells the ones he’s been working on or old favourites depending on the mood. These stories offer escape and comfort to those who listen as well as to Frank. They are occasionally in the current situation and always seem to have a bearing on the present. Importantly to those who hear them, they usually have a grain of hope. It’s that trace of hope that allows them all to keep going.


Vlautin has an easy style. The voice is natural and poetic and really makes me want to listen. It’s this, above all, that has raised the guy into the position of being one of my all-time favourites. Given that it seems so effortless, I’m also incredibly jealous of the man’s talent.


I’ll be trying to hold off from reading his latest, The Free, for as long as I can, but don’t think it will be long. When I’m done, I’ll be left waiting for him to write afresh. I guess I could always try his music while I’m waiting.


A brilliant book that took my breath away more than once and then put it back again every time.
Posted by Nigel Bird at 11:52