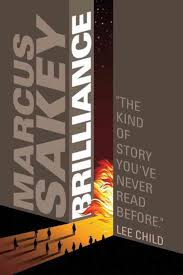 Before the review, news that there have been some strong releases this week.

Anthony Neil Smith has the follow-up to the wonderful All The Young Wariors called Once A Warrior. It's published by Blasted Heath and that alone should have you salivating.

Another title is A Case Of Noir. That's by the excellent Paul D Brazill and looks like it has a tour of Europe to keep you entertained.

And now to Brilliance by Marcus Sakey.


In some ways, I think Brilliance is almost brilliant. There’s a huge amount to enjoy and much of it is highly engaging.


The plot is rather well put together and is based upon an interesting premise. Essentially, the world (read for world, the United States) has been rattled by the appearance of a new type of person, the brilliant. Brilliants have their own highly developed skills and talents, skills that go way beyond the expected norms. Nick Cooper, for example, has the ability to read people by seeing their intention projected in minute physical tells. He can also create patterns by using intention and character to work out what is likely to happen in the future. These skills make him perfectly suitable for working for the government as a DAR agent, a government that is rather nervous about the brilliants because of their talents and because of a growing terrorist fringe within their ranks.


There’s plenty for the brilliant to be unhappy about in a modern world where difference is deemed to be problematic, in particular the treatment and segregation of brilliant children who are taken away and practically brainwashed.


Cooper is a dedicated upholder of law and order. He firmly believes that he is saving his country from civil war and he is completely driven to making sure he succeeds in his work. His dedication to the cause of hunting down brilliant terrorist groups wavers a little when he realises his daughter is also a brilliant. He sees some of the unkind educational indoctrinations of the brilliant academies first hand and hopes he can find a better way for his own child.


In Part One, the world of the novel is set out wonderfully. I particularly liked the way it didn’t take a huge tangent from the way things really are, making each of the dilemmas posed all the more interesting to wrestle with. It’s clever and works very well. It also had the effect of drawing me in completely and in a very natural way, so that I was hooked from the off.


Another reason for the immediate engagement was the high quality of the action and the sense of danger. I enjoyed following Cooper in his initial hunt for the terrorist Vasquez who is on the verge of starting a war and needs to be captured. That hunt doesn’t end as Cooper might have predicted and he is struck by the dedication and passion felt by Vasquez about the movement to which she belongs.


Part Two was where I stuttered a little. Whereas in the early stages I felt I was on the main road and travelling at top speed, in the second section I felt more like I had been diverted along a series of backstreets and didn’t feel quite so connected. In part, this is because Cooper’s mission has taken a huge twist and he enters uncertain and unknown territory. Though there is lots of interest and detail here, there also seems to be a lot more explanation of what is going on and why. A lot more filling in of gaps so that everything remains understood. I also had some sense of being manipulated here, as if page-turning had become the main driving force.


Things do come together again. As relationships form and the many plot twists come together as a tight whole, it regains its balance and returns being an intelligent thriller. The action is all the more exciting because of the amount invested in the characters and it certainly goes out with a bang.


I imagine that this would make a great film. In fact, in some ways it feels like it was a film before it was a book, the structure and mood feeling very cinematic at times.


I really enjoyed the read and think any thriller lovers should pick this up.


I also had a look at the preview of the next book, something I very rarely do when I finish something. The opening line reads:


‘On the monitor, Cleveland was burning.’


How’s that for a hook? It’s certainly got me very interested indeed. There’s plenty in Brilliance to make sure I’ll be back for another look into the world Sakey has created. The things I know are that I have no idea how the story is going to unfold and that it will be a very exciting and interesting read.