One Man's Opinion: THE AXEMAN OF STORYVILLE by HEATH LOWRANCE 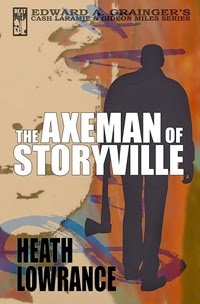 The Axeman Of Storyville
“It was a new time now, a new place, where weak men weren’t destroyed immediately – they were destroyed inch by inch, murdered slowly by stronger men in an indifferent world. It was a much crueller time now, Miles thought.”


Gideon Miles has seen a lot. He’s been at the thick of the West’s wild and seen the horrors of war at first hand. Now he’s landed in New Orleans to a world that is supposedly more civilised. He’s the owner of a jazz club and should be settling happily into his retirement with his lovely wife.


Thing is, there’s a killer on the loose. A crazed axe-man who is targeting prostitutes. Because his victims are considered to be lowlife, the police aren’t interested in investigating, even though there are strong links to a previous set of brutal killings from some years earlier.


The owner of the whorehouse of the latest victim has had enough and goes to try and persuade Miles to tracking down the murderer and putting an end to his spree. Miles, however, isn’t interested. Isn’t interested until the Black Hand become involved and make him an offer he can’t refuse.


The setting for this one is very strong. I really got a sense of the layers of the society as it was and the nuances of a new world forming. An eclectic mix of characters shows the energy of a city fuelled by the exciting tunes and rhythms of jazz and the dark forces of the night. As powerful as anything is the prejudice that is around every corner in a melting pot where things are far from liquid:


“If there was one thing sixty-plus years as a black man had taught him, it was that the need to defend oneself was ever present.”


The story builds really well and the tones are always of the right shade. Lawrence has the ability to drift along with the ease of an old story-teller, capture a mood or a moment with a broad palette and sense of total immersion,  then mix it up with simple phrases that convey a huge amount, all of this coiled tight around an engaging plot that pulls no punches when the going gets tough.


Top of the bill is Gideon Miles himself. He’s wrestling with some of his own demons, in spite of his success. He’s a young man in an old man’s body and his lust for action just won’t let him be.


Whether you’ve read about Gideon Miles in his previous adventures or not, it matters not. If you’ve been there, the references to his past are slickly handled and avoid being overplayed. If you haven’t, I’d wager that it’s likely you’ll go looking for more now you’ve had a taste of what’s on offer.


A really entertaining read.
Posted by Nigel Bird at 21:15