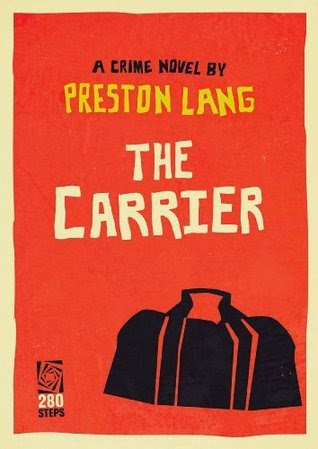 Q: You have a new book out called The Carrier. What’s it about?


A girl with sultry voice tries to hijack drug courier. The courier plays innocent and the girl becomes violent. Things get complicated.


Cyril hadn’t given another thought to the boy in the baseball hat. He assumed the kid had gone back to play pool with his friends or drink beer directly from the pitcher. Cyril turned to the bar and tried to read the scrambled captioning for Monday Night Football. The players hit each other too hard, so he decided to go back to his motel room. He was halfway to the door when the girl stopped him.


She was dark-haired with quick, vital eyes, and she had a voice—low and tangy.


“That frat boy and two of his brothers are waiting for you outside.”


“I just thought you should know.”


They stood for a moment together, neither one ready to end the conversation.


“Why did you call him a fuck monkey?” the girl asked.


Q: Can you give us the best metaphor you used in The Carrier?


A: “It was a blonde. A blonde to make a bishop kick a hole in a stained glass window.”


Q: You didn’t write that; Raymond Chandler did. Also, I’m not sure you understand what a metaphor is.


Q: How long could you last just on the food you have in your apartment right now? Assume unlimited water.


A: Four months. Maybe more. I guess it depends.


Q: If you were a major league baseball player, what song would you want them to play when you came to bat?


A: I Want'a Do Something Freaky To You, by Leon Haywood.


Q: What if they played books-on-tape excerpts instead of songs when you came to bat, then what?


A: Chapter 14 of To the Lighthouse. I wouldn’t step into the batter’s box until they’d read the entire passage. Get a hot dog if you like; I’m waiting for Briscoe to have her vision.


Q: The average major league baseball game takes three hours and four minutes to play. Do you think this is too long?


Q: Who are some writers you like a lot?


Q: What’s an idea for a book you’ve discarded?


A: I had an inspiration about a cat detective novel: a cat who solves mysteries. I thought it was the most original idea ever, but there’s like a thousand cat detectives out there. Really, look into it some time. Most crimes these days are solved by cat detectives—some amateur, some professional.


A: Yes. I like writing a lot. I like rewriting too. Mapping it out, fitting it in place, using varied voices, it’s all a lot of fun.


Q: Do you have anything else coming up?


A: I have a few more novels that are almost ready to get out there: one about some nasty domestic blackmail and karaoke; one about an amoral Canadian investigator, looking into sex and drug trafficking in the USA.


Q: Thanks for answering some questions.


A: Thanks for asking. I’m just happy to be here.

http://www.prestonlangbooks.com
Posted by Nigel Bird at 11:18