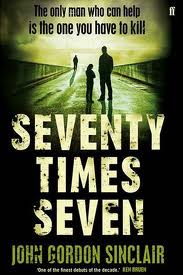 Seventy Times Seven  (US) is billed on the cover as ‘one of the finest debuts of the decade’.  To my mind, it really isn’t that.  It might be better seen as the debut of a writer who shows a fair amount of potential within the thriller genre.


It tells the story Danny Maguire who has worked in parallel with the IRA in the nineties, but never been one of their ranks.  He’s a killer and has been since the death of his brother Sean.  Danny’s resolved to revenge his brother’s death and the opportunity arises when information emerges about the identity of the key players from the time.  It’s a journey that will take him to America, where we’ve already witnessed a number of attempts on the life of Danny’s new target.


The idea of the story is a strong one and it’s easy to see why Sinclair was offered a publishing deal on its basis.


The main positive of the book for me is the skeleton of the story; as a storyboard or in synopsis, there’s a lot to like about the way Sinclair plays things out.  The way it keeps switching location and characters to reveal aspects of the plot is pretty well handled.  It has some of the energy and the drive that one would want from such a book and the core issues are left well-disguised right up until the points at which they are revealed.


The book also describes violence in a realistic way and avoids creating any romantic notions of pain and death.  It also has some pleasing humour running through it that provides a good deal of entertaining material.


I get the feeling that there’s also been a lot of research involved with this project and that creates a believable foundation to the piece, though at times the insertion of such information might be a little crude.


Where I think the work falls down a little and reveals the author’s lack of experience in novel writing is with the pacing, the dialogue and the way the key information is pointed out a little too boldly (at least for my taste).


Essentially the book could be shorter and, with a good edit, leaner and meaner (while still maintaining the warmer elements of the relationships and the very human perspective on ‘The Troubles).


Some of the description is heavy-handed.  There are too many strings of adjectives which slow things down imperceptibly in a similar way that the friction caused by tiny air molecules will eventually bring a moving object to a halt.


There’s nothing wrong in this, but the bed plays little or no part in the scene and it could be much plainer and slicker.


My thought on the dialogue is that the characters need to be more distinctive.  Everyone has a very witty repartee that shows off that talent for humour and this might be worthy of attention.  There’s also rather a lot of exposition through the conversation and it’s a little clunky in that way:


‘God that seems like it was about two weeks ago,’ replied Marie. ‘It’s hard to believe that was only two days ago.’


With a little attention Sinclair’s dialogue could be a real strength – there’s a thin line here that shouldn’t take much to get across it.


Here’s another example of something that could be ironed out in an edit.  It identifies a lot of things that are stated as obvious when they’re not – a little show-not-tell might not go amiss:


‘It was obvious from her expression that checking people in and out of the Lakeshore Hotel didn’t require too many qualifications.’


I wonder what the expression actually was – I’ve been practising in the mirror, but don’t think I’ve mastered it yet.


All-in-all, it’s a mixed bag.  Lots to please a reader and enough room for improvement to suggest that Sinclair has what it takes to make it as a thriller writer if he’s prepared to work on a thing or two.   I know that there’s a second novel on its way at some point and do feel that is likely to step up on this.  Writing is a craft and those skills can only be learned through the doing and by being well-mentored and with these things in place I think that Sinclair can move on up the ladder at a fair rate.
Posted by Nigel Bird at 14:03