One Man's Opinion: MUSCLE FOR THE WING by DANIEL WOODRELL 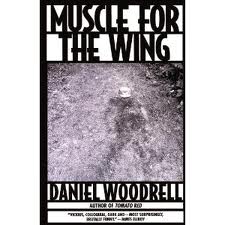 Muscle For The Wing (US) opens in the middle of a piece of action – a bunch of interlopers rip off a protected gambling get-together and kill a cop in the process.  The killers, led by the intelligent, ruthless Emil Jaddick, are part of a right-wing prison organisation that has tentacles which are reaching into legitimate spheres of society.  With The Wing behind them, they feel indestructible.  What they’re not prepared for is the might of the old-school crime-lord they’re up against.


Meanwhile, local cop Shade is chilling with his woman.  At least he starts off chilling, for things heat up pretty quickly.  After a night of passion, a week of camping the couple have planned is called off so that Shade can work the case.


Because the town’s mayor was at the card-game from the opening and because the mayor has strings he can pull, Shade is put out to work with an ex running mate from younger and darker times.  The objective isn’t so much to apprehend the gang, but to destroy it.


So, ‘Shade and his woman’; what’s that about?  It might not be a phrase I’d normally use, but here it’s completely apt.  The society of Frogtown where the book is set, is interestingly structured.  There’s an interesting contrast between a matriarchal world and one where women are regarded as objects to admire, have fun with and keep in line.  The women are able to use this to their advantage much of the time, but when things get tough it’s the rule of a male fist that comes out on top.


There are so many things to love about the book.


It has an easy style that’s efficient with words and yet is full of wonder in the description of people and place.  Here are a few to get the saliva going:


Willie Dastillon.  Could he be behind the robbery and the murder?  ‘Willie might steal a hen, but he wouldn’t break an egg.’  Brilliant.


Frogtown:  ‘Where the sideburns were longer, the fuses shorter, the skirts higher and the expectations lower.’


And Wanda has a behind that’s ‘harder’married life.’


It’s a sexy book.  An action-packed one.  It’s beautiful, violent, interesting and superbly paced.  The characters rule the pages and their lives have damaged each of them.


I hope I’ve learned a thing or two about writing with this one.  It’s quite superb.  As well as a lot of positives, I’ve picked up that I should never call a character How – that can cause more than a few confusions for a reader with a memory like mine.  How?  Check that one out for yourself.
Posted by Nigel Bird at 09:44