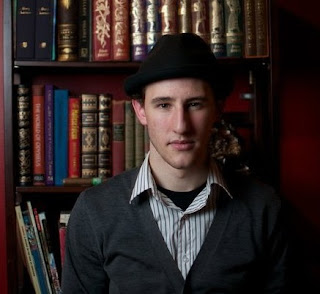 I mentioned a few post ago that I was one sale away from the 350 mark for Dirty Old Town.  Whoever it was that saw me teetering there, thanks for that little extra push.

I read a great story by a name I didn't know a few weeks ago in Plots With Guns.  It's possible that you're not familiar with his name either - if you aren't, I've a feeling you're going to start noticing it around and about from now on (not least for the duration of the rest of this post).

Reginald Hobbes: Welcome Mr. Werndorf, I'm so very pleased to have you here. Now, I have had the honor of interviewing a wide number of individuals, from the renowned Mr. [Censored], to the glamorous Ms. [Name Redacted], but rarely have I been so excited to sit down and have an actual talk with one of my interviewees as with you. Your latest book was, if I do say so myself, an absolute masterpiece, I've never had so much fun in my life! Could you tell us a little about it?


Sigmund Werndorf: I don't have a book out. Or any books at all.


RH: Oh christ, that's not you, that's tomorrow... Right. Well then. Please excuse the horrific rudeness of this next question but we, ah, must start somewhere. Why are you here?


SW: I have a new short story out in the April 2011 Plots with Guns? Marshmallow Fluff? I was also in the most recent (and, unfortunately last, I swear it wasn't my fault) issue of Thug Lit, with Prisoner's Dilemma.


RH: Ah, yes. Of course. How could I possibly have forgotten? I do so love Plots with Guns. A truly smashing source of crime fiction. So you are a crime fiction writer then?

SW: Not exclusively. I generally just write whatever stories come to my head, which really varies as far as genre, but I have some close friends and mentors who are very involved in the crime fiction/noir world which is what lead me into it. The community was so great and the stories so good that I just sort of… stuck around. I still don't feel like I 'fit in', but crime fiction offers so many wonderful opportunities for storytelling that I'm yet to wander out.

RH: Tell us a bit about yourself.

SW: Well first and foremost I'm a student nearing the end of my bachelors degree. I study philosophy and creative writing. I'm Los Angeles born and raised and had been living in San Francisco up until about a year ago, when I re-located to Yorkshire for bit. I'll be returning to San Francisco soon.

RH: That bad up there in Northern England?

SW: Oh, no! It's been fantastic, but the British government only gave me permission to stay for a year. Something about 'small doses'.


RH: I see. So growing up in LA, how has that effected you as a writer?

SW: Well, LA is a big city with a lot of facets, you can live a lot of different kinds off lives in it.

I was recently reading an article about cricket in India. The writer, an American, had gone over for the big super-bowl type tournament they have to try and understand the sport and how important it was to Indians. One of the epiphanies he had was that India was still what he called a 'pre-irony society'. It hadn't yet acquired that sneering, cynical, self conscious, facetiousness that a lot of western countries have. He said India was capable of loving a sports star and embodying all their national pride within him in a way that, say, Americans just couldn't do, with no self consciousness or reserve. It's the difference between America's treatment of Babe Ruth versus Kobe Brian (or any other modern celebrity, I don't actually know anything about sports).

Regardless of whether or not that's a fair or true depiction of India and cricket (I have no idea), I feel like LA really embodies the 'post irony' society. It can no longer simply look at an idea and judge it on its own worth, there's always a sort of meta-consideration going on. Questions like 'what will it look like if and when I interact with this idea?' or 'where will interacting with this idea put me in relation with other people who do or do not interact with this idea?'. I think growing up in that has had a big effect on me as a writer, both in the ways I embody and embrace it, and in the ways I reject it.

RH: And in what ways do you embody or reject it?

SW: Hah, I don't think I can really say. Performing literary analysis on my own work is just a little too onanistic for my tastes.

RH: But interviewing yourself isn't?


SW: I'm going to lean on the fact that it wasn't my idea.

RH: Good luck with that. You mentioned that you study philosophy as well, does this influence your work?

SW: Yes and no. On the one hand, academic philosophy is as much a method of thought as a body of knowledge, and that method of though is part of how I think about my writing and the stories I create. On the other hand, I don't particularly try and infuse my stories with the philosophical questions I study. That kind of ulterior motive just feels so didactic and forced to me, especially in the medium of short stories or flash fiction.

That being said, some of the thought experiments that crop up in philosophy turn into really fun stories (I can't tell you how many legitimate, sincere conversations I've had about Aristotle riding on the back of a unicorn). If you want to see an example of philosophy and fiction coming together wonderfully, I'd recommend Neal Stephenson's Anathem.


RH: What do you have slated for the coming months?

SW: Well, I've got a flash piece coming out with Powder Burn flash soon, I'll be in the July issue of Burnt Bridge and I'll be in the October issue of Title Goes Here. Hopefully there will be even more, but those are waiting on the whims of editors. Anyone interested in contacting me can find details on my incredibly rudimentary website: http://www.swerndorf.com/ . 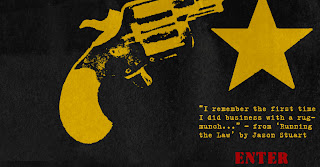 Maybe we should consider a petition to Westmister.  Sigg to stay?