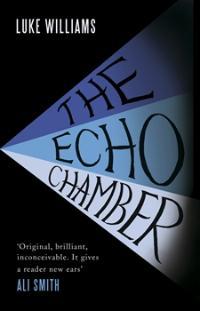 I had a great time last night at the launch of the book The Echo Chamber by Luke Williams.

As I mentioned on Twitter and Facebook, from what I picked up from the reading there's something intriguing about the novel.  It has a curious rythm to it, a sense of the poetic and the profound.  Luke's also introduced sections written by another author, Natasha Soobramanien, to alter the voice and to give a new perspective.  I have a feeling that he's attempting to push at the boundaries of the novel, maybe playfully stretching them into new shapes and patterns.
It says something that for the Scottish launch Luke chose WORD-POWER, the country's leading radical bookshop.
Needless to say, I bought a copy and managed to get an autograph.  It's a book I'm going to cherish and very much look forward to reading.
To cap it all, Luke came across as being a lovely, modest and likeable guy who I hope does very well with his writing - there's a shine to him that suggests he will without difficulty.  Fingers crossed.
Earlier on in the week, I had the pleasure of contacting the people behind Short Story eReader.  They were extremely courteous and helpful and agreed to showcase Dirty Old Town for 7 days.
What I like about their site, other than the fact that they are clearly enthusiasts of the short form and are decent folk, is that they are selecting/working with authors of quality and from a broad range.  You'll see collections from Stephen King, Margaret Drabble, John Grisham, Ben Eisler and Tim O'Brien among others if you go this week.  Next it'll be something fresh.
In 'The Things They Carried' by Tim O'Brien, you have one of my favourite short stories ever, so that might indicate how pleased I am to be included on to their site.
If you love short stories or have something you'd like a shop-window for, this should be in your favourites bar.
Something else you might want to get a hold of in your in-box on a regular basis is the newsletter from Jack Bates.  His interview featured here a few weeks ago and he's gone on to start something new.  To subscribe pop along to http://tinyletter.com/Bloody-Knuckles .  Jack describes it as 'A discussion of the latest in crime fiction with a dash of flash fiction for your entertainment.' Something tells me he's going to come up with the goods.

And so to the Dancing With Myself interview 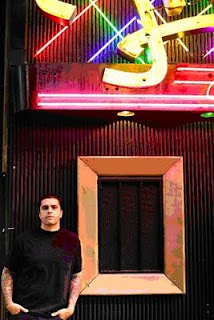 
Ain’t gotta tell me once. Do this—grab breakfast beers?


Los Angeles, South Bay. Born in Torrance, lived in Redondo. Pretty much a blue collar beach community. Small town vibe, everyone knows everyone. My pals growing up were the kids of my parent’s pals, that kinda shit.


No. Skateboard. Everyone in my family surfs though.


Let’s see…my uncle’s buddy got into a fight with Tony Danza at the Wild Goose (a titty bar by LAX) a ways back. They caught Danza cheatin’ at pool. Said he got handled but “The Boss” was a Golden Glover or somethin’, so who really knows. Wish I coulda seen it though.


Huh, thought you were gonna spill about gettin’ arrested on the parents’ front lawn—


What’s on the record player?


Just grabbed the new OFF! 7-inch. Pretty kick-ass. The Bronx, U.S. Bombs, and Descendents always have a home on there too.


The Nickel Ride hit the spot.


Hate math, suck at video games, good way to forget about the day job. Just something that has to get done in order to sleep most nights.


Sure, a bunch but the real draw comes from the city itself, Los Angeles. I’ve lived all over the county and every three blocks there’s a whole ’nother world—that’s only on the surface too. The underground is what really gets me. When I say underground, I mean certain streets or structures that everyday life commences but at night, it becomes a new beast. The backdoor of that barbershop or the basement of that Laundromat can open up and expose all kinds of weird—you name it, any vice, at your fingertips. Kinda like that debauched playground in Pinocchio. Hitting the streets at night, not all the time, but sometimes, takes you on a wild ass ride.


Thoughts on crafting the short story?


I dunno, shorts are strange creature. They demand patience and respect. If either of the two are lacking, it really stains the page. Soon as I think I’ve actually nailed one, I’ll have more thoughts on the subject. Right now, I’m just tryin’ to push the words a little further each day.

What do you think’s the hardest part?

Courage.  Reader attachment comes by baring the soul and right now I'm still a bit yellow in that area.

Who really pulls it off then?


Any publications on the horizon?


Been sidetracked by a novel for the past six months but got a story picked up by Needle. Owe Mr. Cranmer one for summer too.